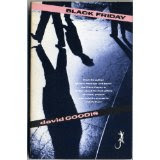 "In fact, the craftsmanship (David Goodis) mastered in all those years of turning out fiction for the pulps was sometimes all that salvaged his books from a morass of aberrant psychology and obsession." --James Sallis

Black Friday is proof absolute of Sallis' comment. It's a crime novel only by default. Here we have the typical Goodis loser loner protagonist, this time named Hart who is on the run from a murder charge. Through a cosmic coincidence he is taken in by a murderous big time burglar named Charley. And his gang.

The story arc deals with a pending huge burglary of fine art and jewelry that Hart will be allowed to join in if he can prove to Charley that he is a "professional"--i.e. a man who never kills for passion but only for money. Loopy at this measure is Goodis makes it go.

But please don't confuse this heist with the book's real import. I remember reading a lot of August Strindberg in my college days as a wanna-be playwright. Goodis has pulled a Strindberg. What a feckless loveless hopeless cast of oddballs and freaks he offers us.

The gang doesn't like Hart so we have scenes of frequent intimidation except for the gangster who starts to like Hart because Hart finds the man's artistic skills impressive (or claims he does), Then there's Freida the obese sad crazed dangerous vamp of Goodisworld. Repellent as he finds her he has to sleep with her because she needs the kind of sex her man Charley can't deliver. He's impotent most of the time. Hart is using her--he literally grimaces when he touches her--but she falls in love with him and Charley figures it out. Charley is not happy.

Then there's Myrna the forlorn faded woman whose brother Paul Hart killed because he seemingly had no choice. She despises Hart at first but eventually they come together. The interplay of all these relationships accounts for seventy-five, maybe eighty per cent of the novel. I couldn't stop flipping the pages though several times I wanted to. This is the only book I've ever read that makes Orwell's Down and Out In Paris and London read like a B'way musical. It's past grim. It's a violent ward of wanton treachery and despair.

It's as close to Grand Guignol as crime fiction gets.
Posted by Ed Gorman at 1:38 PM

"It's a violent ward of wanton treachery and despair."

Geez Ed, with a recommendation like that how could I go wrong?

Or were you talking about the GOP field of candidates?

This is really a fabulous book. One of the best Goodis wrote. He breathes life into a cast of really unlikable characters and you can't stop turning the pages.

Fantastic goods from you, man. Ive study your stuff ahead of and youre just as well amazing. I enjoy what youve got right here, adore what youre stating and the way you say it. You make it entertaining and you even now manage to help keep it wise. I cant wait to go through additional from you. That is really an incredible weblog.

Oddly enough, I'm just finishing "The Wounded And The Slain" in the HCC edition, it's my first Goodis. I've got the original Black Lizard edition of "Black Friday" (with a cool Kirwan cover) on deck. I've already read the intro by Geoffrey O'Brien (I believe it's excerpted from his book), and based on that and this post by Ed, it's apparent that not all of DG's trademark obsessions are on display in "Wounded," so looking forward to "Black Friday." Thanks for the review.

Thanks for sharing. i really appreciate it that you shared with us such a informative post...
Xbox 360 red light fix

Nice post. Thank you for taking the time to publish this information very useful! I've been looking for books of this nature for a way too long. I'm just glad that I found yours. Looking forward for your next post. Thanks :)

Nice post. Thank you for taking the time to publish this information very useful! I've been looking for books of this nature for a way too long. I'm just glad that I found yours. Looking forward for your next post. Thanks :)

You got a very helpful weblog I've been right here reading through for about an hour or so. I'm the beginner as well as your achievement is extremely a lot a good motivation personally. xbox repair website

A real informative blog like this is an exceptionally cool helping resource for a needy information seeker like me! Thanks a lot...

I enjoy what youve got right here, adore what youre stating and the way you say it Send gifts to Pakistan from UK.

I feel that this site could be very useful & informative. Looking forward to more stuff

edition of "Black Friday" (with a cool Kirwan cover)this is very interesting stuff to the readers,

Thank you for taking the time to publish this information very useful.

Ed--methinks you're being spammed. But your review is very informative!

So how can I get some of this good stuff from Pakistan? "... makes Orwell's Down and Out In Paris and London read like a B'way musical." Score by Bach?