A VERY clever post for football Sunday by Fred Blosser

Forget “Deflategate” and other, more troubling allegations of wrongdoing in real-life pro football that have made headlines in the past few months.  Here’s today’s question in the hours leading up to kickoff in Super Bowl 49:  How and where do the cultures of pro football and crime intersect in the world of fiction?  Here are some examples that come to mind immediately . . .

William Campbell Gault’s Southern California PI, Brock Callahan, was known as “The Rock” from his pro football days.  Brock was the Rock long before Dwayne Johnson.  Philip Marlowe played football, although probably in college, not professionally, where, in “a slight miscalculation in an attempt to block a punt, I blocked the guy’s foot instead” (THE LONG GOODBYE, Chapter 8).  If Marlowe played collegiate ball in the mid-1920s, I like to think that he may have lined up against my dad, Ernie Blosser, and his old High Point College, N.C.,  team in some parallel dimension where reality and fiction overlap.  If that was the case, I wonder if it was Dad’s foot that accidentally broke Marlowe’s nose?

Richard Stark’s Parker robs a football stadium in THE SEVENTH (1966).  In not entirely coincidental casting, when THE SEVENTH was made into the mediocre but interesting movie THE SPLIT (1968), the Parker character was played by Pro Football Hall of Fame inductee Jim Brown.  THE LAST BOY SCOUT (1991) opens with a star player running amok on the field with a gun during a big game.

My own favorite story combining crime and football is more obscure.  By my quick count, “Call Your Murder Signals!” was John D. MacDonald’s 80th published story, a 12,000-word novelette appearing in the June 1948 issue of DIME DETECTIVE.  How prolific was JDM in his journeyman years as a pulp writer?  Just consider that, at the time, he had only been writing professionally for two years.  That’s how prolific.

Like most of MacDonald’s other protagonists, the lead character of “Call Your Murder Signals!” isn’t the usual private eye or police detective pulp hero.  Benjamin “Tige” Gaynor, war hero and former All-American lineman, is coach of a pro football team called the Port Davis Travelers.  Tige runs afoul of an influential gossip columnist on the local paper, Welch Williams.  Tige is Williams’ rival for the affection of the columnist’s secretary, Ann Lowry.

Williams runs a column insinuating that Tige has compiled evidence about a shady betting racket that includes crooked players on the Travelers team as well as politically prominent figures.  The column suggests that Tige plans to use the information to blackmail the ringleaders and their henchmen, or failing that, to spill the details to the cops.

The column sets up Tige for a one-way ride with two players whom he’d kicked off the team on suspicion of trying to throw games, Bill Garson and Dane Jorgasen.  Garson shoots Tige with a .32, and thinking him dead, throws him out of the speeding car on a lonely road.  Deftly, MacDonald covers this backstory in a few paragraphs of terse exposition.  The novelette opens mid-action as Tige regains consciousness:

On the slender chance that someone may someday rescue and reprint “Call Your Murder Signals!”, I don’t want to reveal much more of the story.  Suffice to say that JDM introduces another female character, Kelly Wharton, as Tige Gaynor, badly bloodied but determined, sets out to even things with Williams, Garson, Jorgasen, and the higher-ups behind the  gambling racket.  Twelve more double-columned pages of the 17-page story remain, crammed with action and dire complications for the hero.

There’s a little bit of Raymond Chandler influence in JDM’s wordsmithing.  The description of Welch Williams from Tige’s first-person perspective calls to mind the polished but ruthless thugs who inhabit Chandler’s pulp tales and novels: “Welch Williams is a pretty boy with muscles who writes a dainty little column which nibbles with icy teeth at the foibles of the four hundred in Port Davis.  The guy is rough.”

Nevertheless, MacDonald has already put his personal stamp on content and style.  He’s already forged the terse, wry prose that characterizes his work, with full expression in his novels from the 1950s onward, as in this exchange between Tige and pert, wholesomely attractive Kelly Wharton:

“She was suddenly serious.  ‘You should be dead, Benjamin.’

“ ‘Your name. We got it off your driver’s license. Dad says that you are called Tige.  That name sounds as though you ought to be scratched behind the ears.  How did you get it?’ ”

“Call Your Murder Signals!” earns cover billing, if not the cover illustration by the great Norman Saunders, and a wonderful double-page black-and-white interior drawing (uncredited -- Stan Drake, maybe?) from the climactic scene: Williams holds a gun on Tige as Ann Lowry watches in a sexy nightgown and robe.  The blurb on the magazine’s contents page is pure pulp platinum: “Snap into kill formation, boys, and -- CALL YOUR MURDER SIGNALS! When the trigger toughs tried to bench him for keeps, All-American Gaynor decides he’d rather do-in than die.”

MacDonald’s pulp stories turn up occasionally in new anthologies.  Maybe “Call Your Murder Signals!” will be retrieved after 67 years.  At least, in the words of Jake Barnes, isn’t it pretty to think so. 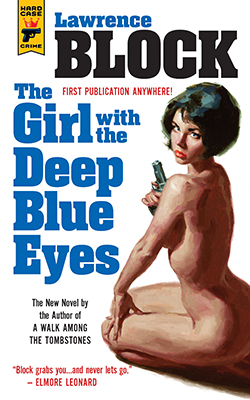 
Hard Case Crime to Publish THE GIRL WITH THE DEEP BLUE EYES New York, NY; London, UK (January 28, 2015) – Lawrence Block, the acclaimed author of more than 100 novels including A WALK AMONG THE TOMBSTONES (recently adapted as a feature film starring Liam Neeson), will publish a brand new novel in 2015 through Hard Case Crime, the award-winning line of vintage-style crime fiction from editor Charles Ardai and publisher Titan Books. THE GIRL WITH THE DEEP BLUE EYES tells the story of a former New York police officer, now working as a private eye in Florida, who gets drawn into the web of a local wife who’s looking for a hit man to help her become a widow. Block has described the book as “a down-and-dirty noir thriller, characterized by my Hollywood agent as ‘James M. Cain on Viagra.’ ”

The novel, which will be published in hardcover in September 2015, is Block’s eleventh with Hard Case Crime. The previous ten include Hard Case Crime’s very first book, GRIFTER’S GAME; the erotic suspense novel GETTING OFF; the bestselling movie tie-in edition of A WALK AMONG THE TOMBSTONES; and the classic noir con-man novel THE GIRL WITH THE LONG GREEN HEART. For more than a decade, Block has consistently been one of Hard Case Crime’s most popular authors, in addition to being perhaps the most highly decorated crime writer alive. Among many other honors, Block has won the Edgar Allan Poe Award multiple times and was named a Grand Master by the Mystery Writers of America, the organization’s highest recognition (previous Grand Masters have included Agatha Christie, Graham Greene, Alfred Hitchcock, Stephen King, and James M. Cain).

“Lawrence Block is, hands down, my favorite crime writer, and it is a privilege to publish his new novel,” said Charles Ardai. “This is a dark, violent, steamy, disturbing story about a pair of characters who will haunt you long after the book ends.”

About Hard Case Crime Called “the best new American publisher to appear in the last decade” by Neal Pollack in The Stranger, Hard Case Crime has been nominated for and/or won numerous honors since its inception including the Edgar, the Shamus, the Anthony, the Barry, and the Spinetingler Award. The series’ books have been adapted for television and film, with two features currently in development at Universal Pictures, a TV series based on Max Allan Collins’ Quarry novels in development by Cinemax, and the TV series Haven in its fifth season on SyFy. Recent Hard Case Crime titles include Stephen King’s #1 New York Times bestseller, Joyland; James M. Cain’s lost final novel, The Cocktail Waitress; eight lost novels written by Michael Crichton under the pseudonym “John Lange”; and Brainquake, the final novel of writer/filmmaker Samuel New Novel by Lawrence Block 2 Fuller. Hard Case Crime is published through a collaboration between Winterfall LLC and Titan Publishing Group. www.hardcasecrime.com

About Titan Publishing Group Titan Publishing Group is an independently owned publishing company, established in 1981, comprising three divisions: Titan Books, Titan Magazines/Comics and Titan Merchandise. Titan Books, nominated as Independent Publisher of the Year 2011, has a rapidly growing fiction list encompassing original fiction and reissues, primarily in the areas of science fiction, fantasy, horror, steampunk and crime. Recent crime and thriller acquisitions include Mickey Spillane and Max Allan Collins’ all-new Mike Hammer novels, the Matt Helm series by Donald Hamilton, and the entire backlist of the Queen of Spy Writers, Helen MacInnes. Titan Books also has an extensive line of media- and pop culture-related non-fiction, graphic novels, and art and music books. The company is based at offices in London, but operates worldwide, with sales and distribution in the U.S. and Canada being handled by Random House.

Libby Fischer Hellmann My brush with The Imitation Game

Please add my email address to your safe sender list so my emails
don't get trapped in the netherworld of your spam box.
Connect with me and let's get social.
Posted by Ed Gorman at 7:14 PM No comments: