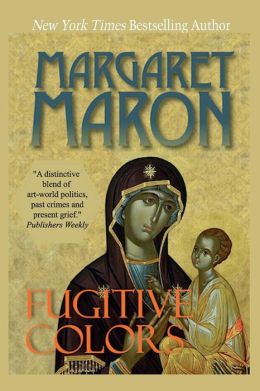 "Transcending genre" is in the eye of the beholder. It is also sometimes a lazy way of praising a novel that exceeds expectations. Still and all I'm tempted to to use it when discussing Margaret Maron's Fugitive Colors. It is an exceptional novel.

Lt. Sigrid Harald, Maron's NYPD homicide detective, becomes involved in an episode which leads not only to the death of a fellow officer but of her lover the renowned painter Oscar Nauman.

Shocking as these plot points are it is what Maron does with them that makes the novel so eloquent and memorable.

In most crime fiction, the world of high culture is generally treated superficially, usually as nothing more than a different and entertaining backdrop. Snobs are fun to observe and listen to.  But not in this case as  Sigrid Harald discovers when, after putting her police work on hold to mourn and gather herself, she is forced back to her calling as a detective.

In investigating the death of Nauman Maron takes us deep into the world of the art scene. In the course of trying to discover the truth behind his murder,  Sigrid Harald is also busy with planning a retrospective of his work. Oscar left her her paintings which are worth millions. But the world of art isn't for sissies. An art dealer central to the story is found murdered.

All this would make for a fine whodunit but Maron isn't satisfied with that.  There is a real sense of mordancy throughout the book.Whether it is her detective's loss of a lover or the embittered and sometimes brutal egos of everybody involved in the art world,  Maron binds all her themes into the disappointments and betrayls that lurk beneath the surface of her story.

For all the style and refinement of the milieu this is a blunt force page turner.

The Passing Tramp on Rex Stout

excerpt from that mighty fine blog The Passing Tramp
http://thepassingtramp.blogspot.com/2014/05/rex-stout-on-writing.html

By that time, Stout declares in his 1971 interview, he had realized "I was a storyteller and I was not a great writer" (I believe Stout means--ahem!--A Great Writer).

Those who have what they see as higher artistic aspirations for the mystery/crime tale (that it be Great Literature), will probably find Stout disappointingly lacking in nobler aspiration here.  I think this is how Julian Symons felt when, in the 1950s, he suggested that Stout should consider killing off Nero Wolfe.  In Symons' view Stout, a talented writer, had been coasting too long on his corpulent sleuth's tremendous popularity.

In the 1971 interview Stout continues: "It seemed apparent to me [in the 1930s] that writers of the first rank get themselves involved in the difficulties of the people they write about.  It was obvious in a paragraph the way Dostoyevsky felt about Raskolnikov, or the way Tolstoy felt about Natasha, and their feeling was of a degree that I wouldn't get."*

*(of course some crime genre theorists have urged consideration of Dostoyevsky's Crime and Punishment as a crime novel; Julian Symons once took this position himself, but later came to believe, as he states in Bloody Murder, that Dostoyevsky's works "far transcend anything the crime novelist achieves or even aims at").

Stout however urges that creating memorable characters "has nothing to do with the level of literature." Tarzan and Scarlett O'Hara are great characters, he says.  He doesn't like the fiction of Bernard Malamud, Philip Roth and John Updike, because these authors are interested in problems, not people.

As for mystery/crime writers, Stout gives mixed praise to Georges Simenon ("Simenon has written some damn good ones, but he's also some written some damn lousy ones") and Ross Macdonald ("a hell of a good storyteller, but I wish he'd quit telling the same story over and over again").

However, he's unequivocally higher on Josephine Tey and Dashiell Hammett (a coupling I think Julian Symons would have found rather odd):

I'd put Josephine Tey...just after Dashiell Hammett, who was the best American detective story writer not counting Poe, who started the whole thing.  In The Glass Key Dash Hammett did the thing Hemingway tried to do in every book he ever wrote, and a better job of it--establishing the essential manliness of the hero by telling a story about him, what he did and what he said and how he handled a situation. 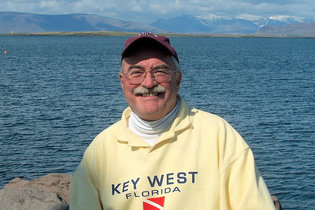 from the New York Times

Continue reading the main story
Continue reading the main story
Share This Page
Jeremiah Healy, an acclaimed mystery writer whose best-known creation, the conflicted private investigator John Francis Cuddy, was a Vietnam veteran who solved crimes and confronted sensitive political issues with compassion, wit and the occasional burst of violence, died on Aug. 14 in Pompano Beach, Fla. He was 66.
His fiancée, Sandra Balzo, said Mr. Healy committed suicide and had suffered from depression for many years.
Mr. Healy, a Harvard Law School graduate who began writing his books while teaching law, introduced Cuddy with the publication of his first novel, “Blunt Darts,” in 1984. He went on to write a dozen more and two short-story collections about the jaded but earnest sleuth who typically plied the waterfront and back streets of Boston. Many of the books were finalists for the Shamus Award, given by the Private Eye Writers of America, and one, “The Staked Goat” (1986), won it.
John Cuddy was a former military police officer and widower who read deep into newspapers and took long, thoughtful jogs across his historic city. He killed when he needed to kill, but readers were as likely to remember his vivid observations of the people and places he knew as they were the violence.

“The morgue was built back in the ’30s,” Mr. Healy, in Cuddy’s voice, wrote in “Rescue” (1995). “It was almost new in November 1942, when the bodies from the Coconut Grove fire were taken there by the hundreds, at least as many people standing in line outside the mortuary that next Sunday morning, waiting to identify friends and loved ones. Now, though, the morgue was literally falling down on the pathologists and technicians who work inside it, gaps in the hung ceiling where the rectangles of Styrofoam have crumbled onto the examining tables and slabs.
“They’ve been talking for years about moving the place out to Framingham on state-owned land that would be a cheaper site than building or renovating in Boston. Until then, the medical examiner struggles with an inadequate budget and a pared-down staff and conditions more appropriate to the end of the 19th century than the predawn hours of the 21st.”
Mr. Healy explored topical issues, including assisted suicide in “Right to Die” and urban-rural divisions in “Foursome.” He wrote about date rape, racism, AIDS and homelessness.
Reviewing “Shallow Graves” in The New York Times in 1992, Marilyn Stasio called the Cuddy books a “superior series” and cited Mr. Healy’s “mousetrap timing and tight plotting.”
“Using fine brush strokes when he likes his subject and sharp pointillist jabs when he doesn’t,” Ms. Stasio wrote, “the author executes one of his better studies on Primo T. Zuppone, a mob enforcer whose aesthetic sensibility belies his skill at smashing kneecaps. ‘Cuddy,’ he advises the detective, ‘you got to look for the art in life.’ If Cuddy doesn’t quite get the message, we do.”
Jeremiah Francis Healy III was born on May 15, 1948, in Teaneck, N.J. He graduated from Rutgers University in 1970 and from Harvard Law School in 1973. He worked in private practice for several years before joining the faculty of the New England School of Law in Boston, where he taught from 1978 to 1996.
Mr. Healy wrote a few novels that were not part of the Cuddy series, and he wrote a separate three-book series, under the pseudonym Terry Devane, that featured a young lawyer, Mairead O’Clare, whose toughness was evident in high school, where she made the boys’ hockey team.
In addition to Ms. Balzo, Mr. Healy’s survivors include a sister, Pat Pinches. His marriage to Bonnie M. Tisler ended in divorce.
Mr. Healy, who lived in Pompano Beach, was a past president of the Private Eye Writers of America and the International Association of Crime Writers.
Like some mystery writers and so-called midlist authors, he began struggling to find publishers when the industry began contracting in the late 1990s. The last Cuddy book, “Spiral,” was published in 1999 and took place mostly in Florida.
Ms. Balzo, who also writes mysteries, said Mr. Healy had drafted two screenplays in recent years and was planning to revive Cuddy in a new book. Research material for it occupies seven feet of shelf space in his office, she said.


Free for Kindle for a Limited Time

thanks to bill crider for this post
Mind Prison - Kindle edition by Dave Zeltserman. Mystery, Thriller & Suspense Kindle eBooks @ Amazon.com.: Do you think you'll be able to guess the shocking ending of MIND PRISON?

In this mind-bending mix of science fiction and noir, a renowned scientist, Dr. Graham Winston, is developing an ingenious and, some might say, horrifying technology that will revolutionize prison. He's close to a breakthrough, except that he finds himself distracted by his beautiful mistress... and thoughts of murder.

Headlines that shouldn't be true but aree