Link Wray: So Glad, So Proud

Link Wray: So Glad, So Proud

by Kim Morgan
Ed here: As usual I played the rube. A few years ago I posted a link to a movie commentary I thought exceptional. I not only praised the article I said that this Kim Morgan should really have a following. Came the e mails. A few suggested I was joking; and a few realized what a moron I was. Kim Morgan has been world famous and world respected for some time even if I didn't know it. So this time I'll say that I respect her even more for this fine take on the late Link Wray one of the all-time great mystery rockers. 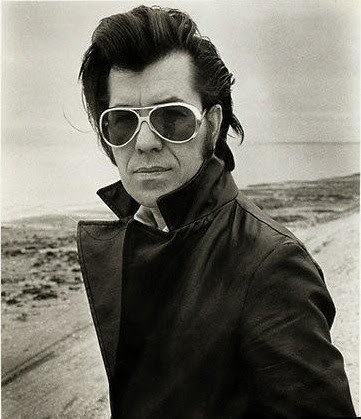 Rock pioneer Link Wray, most famous for "Rumble" was boss in every era.

In 2000, at a small club in Portland, Ore., I witnessed this for myself. The half Shawnee shaman, at the age of 71, performed one of the greatest shows I've ever seen in my life. Some time had passed since Quentin Tarantino featured Wray's famed "Rumble" in Pulp Fiction, so the "Rawhide" rocker attracted a smaller crowd this time around. The better for all of us. The crowd consisted of die-hard Rockabillies, a smattering of older people, varied Wray fans, me and my little siste gods work his power -- taking all that is raucous and dark and soulful and yes, light, and hypnotizing us. There were no bad vibes in that cramped crowd of potential rowdies. Moving on stage like the half-Shawnee he was, he worked us as if performing some kind of Native American rock and roll rain dance, while still playing down and dirty -- music that made us feel alive and real and raw. And then dreamy -- a seedy, sexy, soulful, demonic, beatific dream. 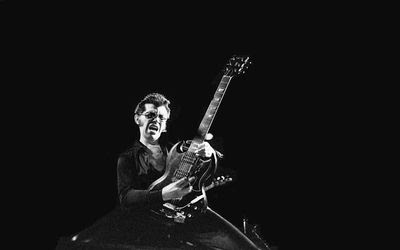 And then this wide awake fever dream became so tangibly real -- a moment that's remained a highlight of my life: Link Wray handed me his guitar in the middle of "Rumble." Yes, he actually, mid-performance, leaned over from the stage, and placed his guitar in my hands. And that devil (an angel in disguise) did so with a grin on his face. I was holding Link Wray's guitar! I didn't scream or cry or crumble into Beatlemania hysterics; instead I held it as long as I could and then, in a trance-like state, passed that sacred idol through the crowd. This was to be shared. And Link just took it all in -- jovial and delighted as the awed audience passed it along, and with great, religious respect. He trusted us. It was safely returned back to Wray who, in spite of his dark image (Wray was still one of the greatest looking leather clad rockers ever) and menacing sound, smiled broadly. I still have his pick, stashed safely in my jewelry box.

for the rest go here:

I still have my scratchy, battered 45 of "Rumble."

Don't feel like the only rube. I don't know Kim Morgan, either. I do know of Link Wray.

Link is one of my favorite guitarists. Thanks for posting this.

This is the third time I've been to your website. Thanks for providing more information.
Also see my site > Picture Booth Adelaide

I was suggested this website through my cousin. I am no longer sure whether this
submit is written by means of him as nobody else know such designated about
my trouble. You are amazing! Thanks!
Feel free to surf my web site ... project freedom

Awesome blog! Is your theme custom made or did you download it from somewhere?

A theme like yours with a few simple tweeks would really
make my blog stand out. Please let me know where you got your
design. Kudos
Feel free to visit my homepage : financial domination

These are genuinely great ideas in on the topic of blogging.

You have touched some pleasant factors here. Any way keep up wrinting.
Review my web site : google