A Brazilian woman tried to kill her husband by putting poison in her vagina, but her plan backfired pretty quickly 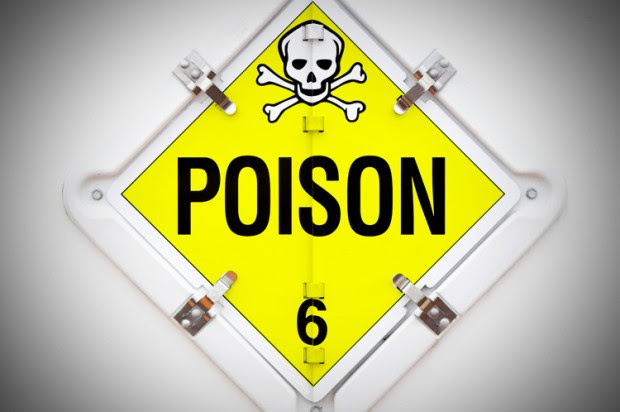 (Credit: Rich Koele via Shutterstock/Salon)
Look, I do not relish making light of attempted murder. But sometimes you just need to write about a really crazy attempted murder.
A Brazilian woman has been accused of trying to kill her husband by putting poison in her vagina and asking him to have oral sex with her.
The intended victim — identified only as a 43-year-old man from Sao de Jose Rio Preto – knew something was going on when he noticed an unfamiliar odor coming from his wife’s freshly poisoned nether region.
But here’s the thing about vaginas, as this woman soon learned: They are very porous.
Realizing that his wife was probably absorbing a majority of the poison she had intended tokill him with, he brought her to the hospital and saved her life.
This guy! He is totally down to perform oral sex 24/7 and will generously rush you to the emergency room after you try to kill him. And they say chivalry is dead!
But he is nobody’s fool: Sources reveal the man intends to sue his wife for attempted murder.
Katie McDonough is an assistant editor for Salon, focusing on lifestyle. Follow her on Twitter @kmcdonovgh or email her at kmcdonough@salon.com.MORE KATIE MCDONOUGH.

Harry Whittington: The King of Pulp Originals
by Jason Starr

Harry Whittington was one of the most prolific writers in the history of fiction. From 1946 to 1984 he produced over 150 novels. At his peak he was, for twenty years (in the 50s and 60s), writing on average about seven novels a year. In today's era, where novelists, aided by computers, struggle to compete one book a year, Whittington's achievement was truly superhuman, never to be surpassed, the literary equivalent of DiMaggio's 52-game hitting streak.
One of the true work-horse writers of the pulp era, Whittington wrote in multiple genres and published additional books under such pseudonyms as Whit Harrison, Ashley Carter, Blaine Stevens, Tabor Evans and Robert Hart Davis. He also wrote screenplays and had a long relationship with Hollywood. While Whittington must have written very quickly to maintain his output, this wasn't a case of quantity over quality. While some of his books were more successful than others and some of his titles began to sound alike--they often contained the words "sin," "murder," and "hell"--he maintained an astounding integrity to his work throughout his career, spinning imaginative plots with crisp dialogue and clearly drawn, unforgettable characters. Maybe his writing wasn't as stylized as Thompson's, Goodis's or Cain's, but his plotting and dialogue was as great, or better.
Born in 1915 in Ocala, Florida, Whittington worked in government jobs before he started writing. He sold his first novel, Vengeance Valley, a western, in 1945. In the fifties, he turned his attention primarily to crime fiction, producing books for Fawcett. Crowned "the king of the paperback originals" by Bill Pronzini, he was the major pioneer of the pulp novel of the fifties, forging a path for writers such as Jim Thompson, Gil Brewer, Lionel White, Vin Packer, James McKimmey, John D. MacDonald and Lawrence Block.

Sadly, only seven of Whittington's novels are in print today, and several of these are as parts of expensive anthologies. Compared to other pulp writers from his era, Whittington's doing well. The overwhelming majority of novels written during "the golden age of the crime novel" are out of print and all but forgotten. While everyone has heard of Cain, Thompson, Goodis, and Willeford, many devoted fans of pulp fiction know nothing about the other great crime writers of the fifties and sixties. Of course not all of these out-of-print books are forgotten classics--some were written quickly for fast paychecks and read that way--but there are hundreds of thrilling crime novels by great authors that have been undeservedly ignored.

for the rest go here: http://pulporiginals.com/Contents-pulp/whittington-intro.html
Posted by Ed Gorman at 2:33 PM 2 comments:

Matt Helm meets Tina, an old World War II associate, who coerces him into helping her with her plans. Thinking she is still one of the good guys, he goes along. After finding out she isn't, he tries to forgive and forget. She kidnaps his daughter to force him to help her. He sets out to find his missing daughter with disastrous results for the WWII associate.

After a brief refresher course, Helm is sent to Sweden with the task of killing "Caselius," a pesky foreign agent. Using his experience as a photographer as his cover story, Matt Helm manages to identify "Caselius," track him to his lair, and permanently remove him from among the living.

"Donald Hamilton is one of the three best American thriller writers, the other two being Dashiell Hammett and Ross Thomas."   John Fraser

I have to admit that I was never a big fan of Ian Fleming's. The Bond stuff was moderately amusing but I just never took to it. The late great Anthony Boucher said it best for me:  "Donald Hamilton has brought to the spy novel the authentic hard realism of Dashiell Hammett; and his stories are as compelling, and probably as close to the sordid truth of espionage, as any now being told."

Historians have borne out just how realistic the Helm novels were. The Cold War was just as seamy, psychopathic and deadly as Hamilton insisted it was.  One more plus is the style. This man could write the English language the way God intended--wry, brutal, dazzling.

I promise you--buy these first two Helms and you'll buy all the rest. He was a true master.

The Ten Best 30 Rock Episodes Ever

This week Matt Zoller Seitz pre-eulogized 30 Rock as the NBC comedy’s Jan. 31 finale sadly approaches. “30 Rock has evolved from an inside-showbiz farce with sporadic fourth-wall-breaking sight gags and meta dialogue to a weekly cyclone of surreal tomfoolery,” he writes. And yet, as a compulsively outlandish parody of the business of television and sitcoms themselves, “there’s no earthly reason why we should feel for any of its characters; and yet we do, because the very tropes that 30 Rock loves to mock are embedded in our TV-watching subconscious. The show says, ‘Look at how shamelessly television pushes your buttons!’ while hammering on those very same buttons.” To further celebrate its passing, Seitz picked his ten favorite episodes of the show’s run.
10. “100”Season 5, Episodes 20 and 21
Jack’s boss announces that he’s canceling The Girlie Show. The greatest self-aware, self-congratulatory flashback party this side of a classic Simpsons episode. 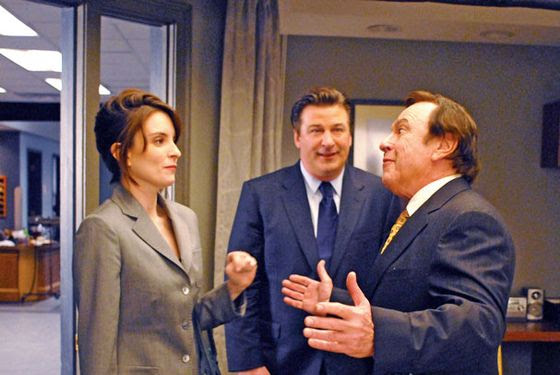 "Succession"
9. “Succession”
Season 2, Episode 13
Jack is passed over for promotion to CEO, and Tracy decides to produce the world’s first pornographic video game. A mix of ongoing plotlines with a one-off weekly clownfest.
8. “Dance Like Nobody’s Watching”
Season 6, Episode 1
Jenna judges America’s Kidz Got Singing; Tracy is convinced Liz is a “crack whore”; Kenneth prepares for the Rapture. A great example of the show’s kookiness and warmth.
7. “Dealbreakers Talk Show #0001”
Season 4, Episode 7
Frank replaces Liz as head writer of TGS; Tracy becomes obsessed with winning an Emmy, Grammy, Oscar, and Tony. The show’s matter-of-fact lunacy really shines here.
6. “Gavin Volure”
Season 3, Episode 4
Liz spends a weekend with the title character, a fraud and arsonist (Steve Martin). Martin’s discomfiting performance is one of the show’s richest star cameos.
5. “Ludachristmas”
Season 2, Episode 9
The titular holiday climaxes with the staff tearing down the Rockefeller Center Christmas tree. A classic bizarro episode that builds and crests like a wave. 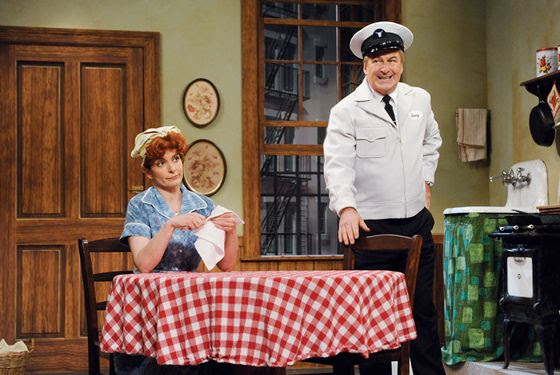 "Live From Studio 6H"
4. “Live From Studio 6H”
Season 6, Episode 19
The better of 30 Rock’s two live episodes; includes clever allusions to Laugh-In,Amos & Andy, and The Honeymooners.
3. “When It Rains, It Pours”
Season 5, Episode 2
Jack is obsessed with mortality and records a video for his unborn son; Tracy races to the hospital for his daughter’s birth. A great mix of goofiness and sentiment.
2. “My Whole Life Is Thunder” Season 7, Episode 8
Jenna plots revenge on Liz for upstaging her own nuptials by getting married; Jack delivers a eulogy for his mother so stirring it’d make Mark Antony weep. 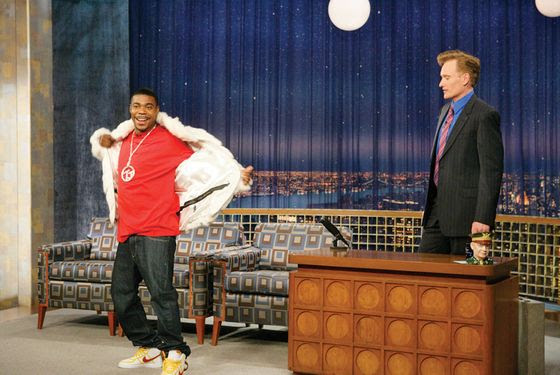 "Tracy Does Conan"
1. “Tracy Does Conan”
Season 1, Episode 7
Prescription pills make Tracy hallucinate on the day of an appearance on Late Night. A brilliantly structured episode with a classic 30 Rock race-to-the-finish.
*This article originally appeared in the February 4, 2013 issue of New York Magazine.