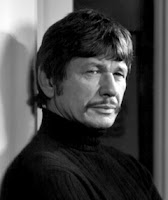 During the early 1970s, Charles Bronson was the biggest star in the world--well, pretty much everywhere except the U.S. However, he quickly attracted the attention of American studios and became a boxoffice attraction stateside with films like Death Wish, St. Ives, and Telefon. Before his unexpected international stardom, he headlined quality low-budget efforts (Machine Gun Kelly) and made memorable impressions in supporting roles in movies like The Magnificent Seven. Sure, he starred in some stinkers in the 1980s, but let's forget about those and focus on the five best starring performances from the underrated Charles Bronson:

1. Death Wish.  Morally repugnant? No. Ethically questionable? Probably. Highly manipulative? Definitely. This 1974 controversial vigilante drama may be difficult to watch at times, but it's well-made and acted with conviction. Film critic Judith Crist noted Bronson's "superb performance" as the everyman who gradually evolves into a one-man jury. Even Rex Reed wrote: "People who are tired of being frightened, endangered and ripped-off daily in New York City are going to love Charles Bronson in Death Wish as much as I do." The less side about the Death Wish sequels, the better.

2. From Noon Till Three. Playwright Frank D. Gilroy (The Subject Was Roses) wrote and directed this clever satire about celebrity. Bronson plays Graham Dorsey, a minor outlaw who spends an afternoon with an attractive widow (Jill Ireland--Bronson's wife). Her later account of their romantic interlude--imaginatively enhanced--spawns a bestselling book, play, and song. She becomes wealthy and he winds up in prison where no one believes that he's the famous Graham Dorsey. Bronson creates one of his best characters in Dorsey, who is equally charming and conniving. Ireland gives her best film performance.

3. Once Upon a Time in the West. Sergio Leone's Spaghetti Western masterpiece is an ensemble piece about the final days of the Old West (though, with its three-hour length, each of the four main characters get plenty of screen time). Bronson is a standout as the enigmatic Harmonica, whose motive for seeking vengeance against Henry Fonda's nasty villain isn't revealed until the film's grand showdown.

4. Telefon. Bronson portrays a KGB agent who teams with an American spy (Lee Remick) to uncover a network of programmed assassins--apparently normal people who turn into killers after listening to Robert Frost's poem "Stopping By Woods on a Snowy Evening." Sounds preposterous? Perhaps, but it's immensely entertaining and Bronson hits all the right notes as the dogged pursuer with a photographic memory.

5. Hard Times. Bronson plays a drifter during the Great Depression, who meets a hustler named Speed (James Coburn) and becomes a successful bare-knucled fighter. It's a quiet Bronson performance, but he and the fast-talking Coburn (along with Strother Martin as their "cut man") make a fine team. TIME critic Jay Cocks called the film "a tidy parable about strength and honor" with Bronson's "best performance to date."

Honorable Mentions:  The Great Escape and The Magnificent Seven (two excellent films included here only because Bronson's screen time is limited); Red Sun (an international Western more fun than it has a right to be); and Breakheart Pass (a Western mystery set on a train).

Hard to argue with that list. Good films all.

Good picks. As honorable mentions, I might include Chato's Land (sue me, I liked it) and Mr. Majestyk.

Hard Times is my favorite, close behind is Assassination, with Jill Ireland. The interplay between them, knowing they were man and wife, brings a bonus irony to the roles.

Great list. Everyone a winner. I'd also add The White Buffalo, one of the weirdest westerns I think ever filmed. It's basically Jaws, only on land and instead of a shark it's a giant white bison.

Haven't seen it for years but I remember that I liked Mr Majestyk from Elmore Leonard's darn good book of the same name.
TWB

Great list Ed and really glad to see TELEFON included - was just watching it again the other day in fact.

Hard time and once upon a time in the west are awesome. I love to see it again and again. Its amazing.