No So Fast-Robert S. Levinson 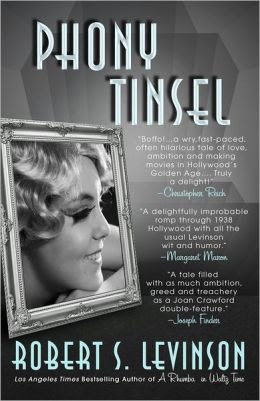 Ed here: As I said last night I'm giving up my blog at least for some time. But I also mentioned that I had two excellent PRO-FILE pieces that I really wanted to share with my readers.

Bob Levinson is a good friend of mine. Among the many, many interesting aspects of his life is the fact that he grew up in Old Hollywood. He lived near an open air market where stars big and small shopped several times a week. And Bob has got the photographs and autograph pages to prove it. He met dozens and dozens of actors over his young years. Add to this the fact that he grew up to become a prominent talent agent--well who better to write Phony Tinsel?

This is one of the freshest, liveliest and page-turningest  takes on Old Hollywood ever written.  Buy a copy for yourself and then rack up a few more for gifts.

1. Tell us about your current novel or project.
I've been gearing up to put some serious promotion behind my tenth novel, PHONY TINSEL, a seriocomic thriller set in 30's Hollywood, the “Golden Age of Movies,” that ships in January. Booklist comments in an early review: “The author could have played the story as a noir—all the elements are here—but, instead, he takes a lighter tone, peppering the tale with humor and wordplay…Fans of Hollywood’s Golden Age will have lots of fun with the real-life movie references.”

PHONY TINSEL focuses on fledgling screenwriter Charlie Dickens, who’s lured into a cockeyed scheme to murder her autocratic, skirt-chasing, producer-director husband, Maxwell Moonglow, by internationally adored film idol Sarah Darling, more femme fatale in real life than in reel life. At the same time, he’s torn between Polly Wilde, a conniving ingénue more in love with the promise of stardom than with Charlie, and Robin Moon, a missing damsel in distress he’s vowed to rescue from the realities of life beyond the silver screen.

Mystery and intrigue skyrockets, con artists, crooks and killers appear and disappear, and the body count multiplies as Charlie stumbles through a series of mishaps at locales as diverse as the high-priced, ultra-exclusive neighborhoods of filmdom’s elite (e.g.,Cecil B. DeMille, Buster Keaton); small-scale Southern California cities and farming communities on the edge of nowhere; hobo-infested freight trains; depression-era Hooverville homes to the blessed and the damned; a Chinatown opium den; the RKO and David O. Selznick movie studios; and the set of a B-western cast with cowboy actors of the era (e.g., Tim Holt, Harry Carey, Andy Devine, Ward Bond) and a Cheyenne Indian, Wahanassatta (“He who walks with his toes turned outward”), who has more than scalps on his mind.

Next in the pipeline, for 2014, is FINDERS, KEEPERS, LOSERS, WEEPERS, a far tougher, darker crime story than PHONY TINSEL that draws on personal experience during the decades I spent in the music industry running a major international public relations organization that over time represented more than 700 top-tier clients. (A sampling in my web site bio: www.robertslevinson.com )

FKLW’s anti-hero, an international rock idol, is sentenced to prison on a trumped-up rape charge. Nine years later, he emerges a mental and physical cripple bent on revenge, pursued by a tabloid reporter suffering her own demons and a failed record company executive chasing after personal redemption. They ultimately cross paths on interlocking journeys that will not end well for all of them.

Meanwhile, I'm playing around with ideas for the next traditional hardcover novel, as well as a possible novel and some short story collections to go direct to eBook, where I'm already invested with earlier and new titles on Amazon Kindle, Barnes & Noble, Smashwords, etc. A lot if not all of the work will use show business past and present as home ground.

3. What is the greatest pleasure of a writing career?
The act of writing, of course, along with the luxury of writing what I choose to write, frequently outside the box that's outside the box, in both novels and short stories. … To my ongoing amazement, I’ve passed the tenth anniversary mark in a world where my dream of many years standing was to get one novel written and published.

Understanding there's not enough time in a day to live much of a life away from the computer and the work(s) in progress, especially hard for someone (aka me) who's always been a people person. I only have me for company when I'm writing, no radio, no music, no television, no distractions whatsoever, and rarely a time out or time away from a seven-days-a-week discipline that daily runs from early morning to late afternoon, taking time outs only for lunch and toilet travel. In fact, be right back...

It's no longer news that an author can position himself to build a bigger, better career and earn more in royalties by abandoning traditional publishing for the ebook revolution. Perhaps one smart move traditional publishers might make in order to justify their holding onto an author and taking a chunk of his ebook royalties: more favorable contractual terms and broader, stronger marketing, publicity and promotional support.

6. Are there any forgotten writers you’d like to see in print again?
Thanks to ebooks and the proliferation of small presses, most of the writers I might name are again in print or otherwise available. Among some who might be "overlooked" and are worth giving a try for the first time or again: John O'Hara, Oakley Hall, W.P. Kinsella, Jack Finney, Gerald Seymour, Peter De Vries. Through his blog, that Ed Gorman guy has been familiarizing me with a batch of mystery authors I've known by name only (or not at all), and hope to check out when reading time allows.

7. Tell us about selling your first novel.
It's after eight or nine months of submissions and rejections for THE ELVIS AND MARILYN AFFAIR. My agent calls. "Didn't you say you're coming to New York?" "Yeah. Why?" "An editor is thinking seriously about acquiring the novel. I think we can close the sale if she has a chance to meet you." "Done," I say, my pulse doing gymnastics. "Set it. I'm there."

In New York, I do three days of PR business and then must sit out a weekend and a Monday in front of a Tuesday lunch with the editor, three and a half days of nervous anticipation. I have a Monday lunch with a couple old friends at a budget-busting restaurant overlooking the Radio City ice rink. I explain what's keeping me in New York. I'm told, "Elvis? Marilyn? Don't worry, she'll buy the book." I worry anyway.

Tuesday. The editor and I lunch one-on-one at Bobby Flay's Mesa Grill. We get along famously. Her nice words about the book precede questions about my show biz background. I flood her with anecdotes, including a few about Elvis (whom I knew casually) and Marilyn (whom I'd never met, only several friends in common). We part all smiles, no further reference to the book and its status with her; me too polite to put her on the spot with the question; also, for fear of getting an answer I don't want to hear. Flying home, best I can do is hope for the best. The answer comes by phone a few days later. "Congratulations," my agent says. "We have a deal."