How accurate Is Californication? The great Ken Levine 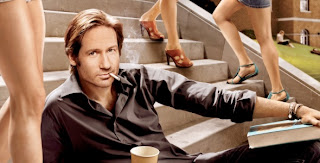 Ed here: I  gave this series a full season and then stopped watching it. Did even Warren Beatty get laid this much? It teetered right on the edge of self-parody. It ultimately reminded me of how Jerry Seinfeld parodied the Eagles' "Desperadoes." Yeah if there was ever a group of real cowhands and gunfighters it was the Eagles all right.


For many of you the 4th of July holiday begins today. What better way to celebrate than with Friday Questions?


Dodgerdog has one near and dear to my heart:

Both "Episodes" and "Californication" have story arcs involving television writers getting it on with hot young actresses on their shows. (Hilarity ensues.)

No question David Duchovny and Stephen Mangan are attractive guys. My question: since television writers are writing these shows, how much of this is from their own or observed experience as television writers, and how much is wishful fantasy?

There’s an old joke – Did you hear about the Polish actress who tried to get ahead in Hollywood by sleeping with writers? 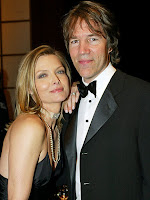 I’m not saying it never happens, but it just doesn’t happen enough. That said, there have been occurrences. Chris Thompson created NAKED TRUTH for Tea Leoni that resulted in a rather public and ultimately messy affair. David E. Kelley is married to actress Michelle Pheiffer. There should be a statue of him in front of the Writers Guild.  Katey Sagal is married to Kurt Sutter and Jenna Fischer walked down the aisle with writer Lee Kirk. There are other examples. I’m sure you can Google them.

I find this one of the most obnoxious shows I have ever watched. You couldn't pay me to watch it again.
Now EPISODES I like.

And, fwiw, most of the folks involved here are writer-producers, very much including David Kelley (who in looks probably more than talent, at least, had to be a step up for Pfeiffer after Fisher Stevens).