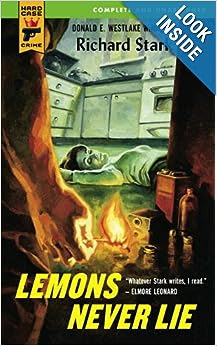 
There are so many twists, turns, starts and stops in Lemons Never Lie by Donald E. Westlake as Richard Stark that the novel becomes a kind of a crimonious picaresque filled with mugs, thugs, killers, victims and Parker's redoutable thespian friend, Alan Grofiled. There's also a lot of notably brutal violence.

The book begins with Grofield visiting Vegas to partake of a robbery that will give him the money to survive one more season in his summer theater. Grofield, in case you didn't know, is a "purist" when it comes to acting, his chosen profession. No movies or television for him. Stage only. But it takes his other profession, robbery, to support his theater. Only his long-supportive wife understands how hard he works at both careers.

A man named Myers has set up a robbery plan and has called in amateurs to help him. With the exception of a man named Caithcart and a dangerous man named Dan Leach, the group is a zero. As is Myers. Now Myers, who speaks with a boarding school accent, is one of the great villains in Westlake's world. He is a true sociopathic murderer; a serial killer of a kind. Grofield and Leach decide against working with him.

This is the set-up. There's an early twist that lets us know just how nasty Myers is. And then the various adventures start. Grofield resembles his friend (and fellow robber) Parker only occasionally. For instance, he loves chit-chat, feels sorry even for a guy who tries to kill him and lets another live that (as reader) you know should be killed on the spot, slowly and joyously.

There's also a lot of witty humor. Grofield gets into the damnedest conversations with people. Once in a while you may even forget you're reading a crime novel. Westlake has a great time riffing on all the cliche exchanges you read in most crime fiction. At a couple of point Grofield starts sounding like a TV shrink.

Lemons Never Lie is Westlake at his very best. While there's a screwball comedy-feel to some of the misadventures, the unrelenting violence reminds readers that the Richard Stark is the master of the hardboiled. The masterful plotting, the wry way the genre cliches are turned inside out, and the earnestness and humanity of Alan Grofield make this a pleasure from page one to the unexpected ending.
Posted by Ed Gorman at 9:26 AM

Unfortunately every time I glance at the title I flash on "Lemony Snicket," about whom something popped up the other day as a Facebook ad. I didn't open it, but this reminds me it's high time I revisited Donald Westlake. And this sounds like just the snicket...I mean ticket.

After reading the other Grofield novels I wasn't surprised that this one was the one Hard Case Crime picked to reprint. This is firmly in the world of Parker. The others are good, but there sort of off in a parallel dimension.

My favorite part of this book is what Grofield says as he's buying a gun: "I have to drum someone out of the corps."