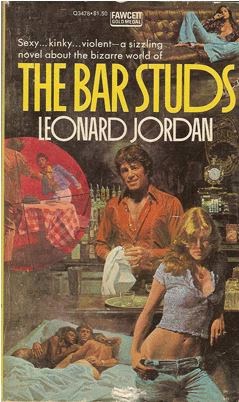 The survivors in writing are often more interesting to me than the stars who flame out and disappear.
William R. Cox the pulp writer died at ninety two at his typewriter. He'd never been a big star but he'd written pulps and paperback novels for sixty-some years. Ryerson Johnson graduated from the pulps into paperback originals and worked for almost fifty years. Margret Millar had never been a big seller but she finished two novels in the last four years of her life after beating lung cancer and being declared legally blind. Survivors.

Last year or so I became aware of a writer named Len Levinson. I'd seen his name on various blogs but not until I discovered Joe Kenny's truly unique and amazing blog Glorious Trash did I begin to learn about Len. Talk about a survivor. He's been working steadily since 1971 without getting either the promotion or recognition he deserves. Joe convinced Len to write about some of his books and in so doing Len has given us a finest record of the free lance fiction writer I've ever read. And not just because of the ups and downs of his writing career but also the ups and downs of his personal life.

I worked in advertising and PR for ten years after I graduated from college, Michigan State University, class of 1961.  First I wrote direct mail letters and brochures for Prentice-Hall, a publishing company in Englewood Cliffs, New Jersey.  Then I was pressbook editor for Paramount Pictures, which involved writing articles and feature stories based on information supplied by publicists assigned to movies being filmed.  Next I was pressbook editor for 20th Century-Fox, but soon was promoted to trade press contact, which involved writing daily press releases and dealing with reporters and editors who worked for publications like VARIETY, BOXOFFICE, MOTION PICTURE DAILY, FILM DAILY, and others that I don’t remember.  Finally I was a press agent with Solters and Sabinson, an agency that had many clients in the entertainment industry such as the Beatles, Rolling Stones, Frank Sinatra, Barbra Streisand, Flip Wilson, Bob Hope, Benny Goodman, the Playboy Organization, all the David Merrick Shows, numerous movie clients, Ringling Brothers and Barnum and Bailey Circus, Holiday on Ice, Caesar’s Palace in Las Vegas, and others that I don’t remember.  I resigned my position at Solters and Sabinson to become a novelist.

About The Bar Studs


I wrote The Bar Studs because I liked to go to bars when I lived in NYC. And I was drawn to bars not because I liked to drink, but because that's where the action was, where I could meet single women interested in romance, the female counterparts of myself.

During my 42 years in New York City, I went to all kinds of New York bars, from the Oak Room at the Plaza, to singles bars on the East Side, to Village hangouts, to Bowery dives, to gay men's bars in the Village out of curiosity, and even one jaunt to a lesbian bar called The Duchess, where I was made to feel very uncomfortable.

I guess I should amend what I wrote above, because ultimately I didn't go to bars just for romance, or to get laid, although those were my primary objectives. I also went because I met many interesting people of all types who were great storytellers.

I especially enjoyed a Village bar called Bradley's that featured live jazz. I'd give almost anything for another musical night at Bradley's, but Bradley now is dead and the bar no longer exists, as far as I know (I no longer reside in NYC).

Since my writer's mind was and is always tossing up stories, a novel about bars coalesced in my mind as I sat on those bar stools around 1972. I conceived it as the varieties of bar experience, about all the different kinds of New York bars I went to, and the different people I met there.

Before arriving in NYC, I worked as a bartender at various joints in Lansing, Michigan, when I was a student at Michigan State University. So I knew what it was like on the other side, rushing back and forth on the floorboards, mixing, pouring, collecting money, making change, becoming embroiled in conversations, and learning that inebriated people often spill their secrets to bartenders, while certain women, after a few drinks, tend to flirt with the bartender.

My working title was "The Bartenders", and the developing novel told the stories of six bartenders. Adrian and Johnny worked in a bar similar to Bradley's in the Village, Leo in an East Side singles bar similar to Maxwell's Plum, Teddy in a Village gay bar similar to Ty's on Christopher Street, Jake was a Bowery bartender, and Houlihan served martinis and other libations to the upscale crowd at the Oak Room at the Plaza.

Actually, the novel was about more than bar life. Like all my novels, it also was about love, hate, violence, anger, crime, frustration, and the pornography of everyday life.

Fawcett bought publication rights, changed the title to The Bar Studs, and gave it what I considered a great cover. It became my best-selling novel, around 95,000 copies bought by unsuspecting readers. I hope it gave them a good ride. It certainly was a great ride for me. I love that book and always will. It's about a New York City that's gone forever, but never forgotten by people who were there.

Of course, the novel includes examples here and there of my occasional awkward writing, and egregious bad taste. But I was a sleazy character myself in those days, and couldn't help myself. Now I'm trying to be a dignified elderly gentlemen, without much success, I'm sorry to say.

Q. This really a mainstream novel that combines the kind of large cast novel so fashionable in the 70s and 80s with the kind of journalistic tone you'd fine in the Village Voice. You do a great job with the sociological strata of pour people and your bars. Were you ever tempted to do another book with this kind of range?
A.  I never wrote another novel quite like THE BAR STUDS, but most of my third person novels tell their stories from varying points of view like THE BAR STUDS.  I wrote HYPE! by Leonard Jordan right after THE BAR STUDS, and there are certain similar stylistic points of view.  My editor for THE BAR STUDS was Harvey Gardner at Fawcett, who used to refer to it as THE BAR STOOLS.
Q. You mention the women you met in the bars. You write women very well. Do you make a special effort to do that?
A.  I make a special effort to write everything well, but must confess that women fascinate me.  They’re very different from men, and every woman is different from every other woman.  I don’t know what it’s like to be a woman, so my women characters are based on what I observe, hear and read about.  A departed friend of mine named Mike Nichols, who was a significant influence on my life, told me once that “Women just want to be loved,” and I think that’s true.
Q. In the same year or so you were writing The Bar Studs were you also writing other books because of economic necessity?
A.  I wrote THE BAR STUDS in the early 1970s.  As near as I can remember, I had accumulated enough money from writing other novels to take time off to write it, and felt certain it would make me rich and famous, which, needless to say, it didn’t.
Q. I'm not sure what you mean by "the pornography of everyday life.”
A.  I agree with Freud that sex underlies all aspects of life, whether we’re conscious of it or not.  If the women I see every day could know what’s going on in my mind, they’d dial 911.
Q. Do you think your mentor Peter McCurtin could have helped you with a book of this depth and scope?
A.  Peter could have helped with anything I wrote.  He was a very skilled writer, reader and editor.  But we weren’t close friends who hung out together.  He was very busy with his own obligations, so I couldn’t ask him for help with novels that he hadn’t contracted me to write.  Actually, I never asked him for help with anything.  He told me what he wanted, I wrote the novel, submitted it, and that was the end.  He never asked me to re-write anything.
Q. One of your novels was recently optioned for the movies. Tell us about that.
A.  The novel is THE LAST BUFFOON by my pseudonym Leonard Jordan, published by Belmont Tower in 1980, which is a very strange, vulgar and kind of disgusting story here and there, about a pulp fiction writer struggling to stay alive economically, sort of autobiographical one might say, and played for laughs.  The cover shows a photo of me standing in a trash barrel in Washington Square Park in Greenwich Village, which I always thought appropriate.  I’ve received much fan mail for THE LAST BUFFOON, and many people have found it amusing.  It was optioned twice previously for movies but no movie ever was made.  I’m hoping this one will appear on the silver screen so that I finally can have a big payday.
Q. I should have asked you last time. Are you working on a book now?
A.  I’m working on four books:
1.  A mystery/romance set in New York City 1961, first year of the Civil War.
2.  A mystery set in NYC 1995, about a disgraced NYPD cop charged with a murder he did not commit.
3.  A romantic comedy set in New York City and Miami during the mid 1980s, based loosely on my first disastrous marriage.
4.  A non-fiction memoir of my three years as caseworker with the NYC Administration for Children’s Services (1997-2000), which totally disillusioned me about the ability of government to solve poverty and related social problems.
All these four books are in final editing stages.

Ed, thanks for this great interview with Len, who may not have gotten rich but he is getting some fame (or at least due respect) at long last from you & Joe Kenny. THE LAST BUFFOON is a great book. Len, I look forward to reading your works in progress.