From Brash Books: Off and Running by Phillip Reed 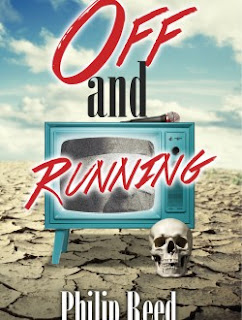 Author Philip Reed shares how his own experience as a writer, and a unusual brush with stardom, inspired his new thriller Off and Running, which will be published in August by Brash Books.
A number of years ago, when I was young, broke and trying to support my family, I was hired to co-write the autobiography of a ‘60s TV star. I better not say who it was for reasons you’ll see in a few minutes – though speculating is invited. This icon was someone I had watched when I was young. So, to be sitting across from this man decades later was a wonderful and disorienting experience. It’s strange to see someone in the flesh after worshiping them on television for years. At times, I even thought, “Is this me? Or am I watching TV?”
The autobiography progressed nicely and I even became a confidant for this TV legend. I was sure this would be my big break. But one morning when I showed up to interview him, I learned that he had suffered a stroke and he could no longer talk. His family took over the book project and they were a nightmare to deal with. Some weeks later I visited my stricken friend, now in a wheel chair, his eyes glassy and staring. But suddenly, he recognized me and began speaking. He didn’t say much more than a few sentences, but it gave me the idea for a novel.
In my new thriller Off and Running, now available for pre-order, Jack Dillon, a down-on-his-luck writer, kidnaps the subject of his biography and takes him on the road to finish his biography. The story provides a great chance for me to use four of my favorite California locations. The tale starts in the Hollywood Hills, moves to Pebble Beach and then the chase continues to Lone Pine, at the foot of the Sierra, and ends in a ghost town in Death Valley.
My father once remarked that writers are lucky. When bad stuff happens to a writer, it’s grist for the mill. When bad stuff happens to normal people (writers aren’t normal) it’s just bad stuff.  I wrote the book in fits and starts over several years and every page was cathartic. Now Brash Books will finally bring it to print, and bring a positive end to a stormy chapter of my life.
Tags: autobiography, Death Valley, Lone Pine, Off and Running, Pebble Beach, Philip Reed, thrillers