from Gravetapping HUNT AT THE WELL OF ETERNITY James Reasoner 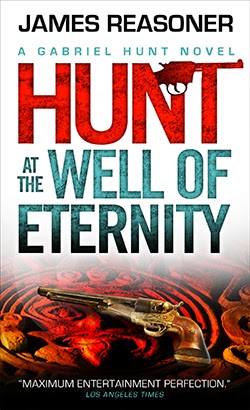 from Gravetapping by Ben Boulden

HUNT AT THE WELL OF ETERNITY by James Reasoner
Posted: 01 May 2014 07:26 PM PDT
In 2009 Hard Case Crime introduced an adventure series featuring explorer, millionaire, and all around good guy Gabriel Hunt. There were six novels published before HCC’s partner, Dorchester Publishing, made its slow and painful fall into oblivion in 2011. The novels were published as by Gabriel Hunt, and the actual author was identified on the title page; each novel was written by a different writer.
HCC’s new publishing partner, Titan Books, is reissuing all of the Gabriel Hunt novels starting with the first title, Hunt at the Well of Eternity. This time around the writer’s name is on the front cover (James Reasoner, in this case), but the story is all Gabriel Hunt. Hunt is something of a playboy adventurer. He is sponsored by The Hunt Foundation—a family thing—to travel around the world in search of really cool stuff (think Indiana Jones with more punch).
Hunt at the Well of Eternity opens in New York City at a gala event in the Metropolitan Museum of Art. Gabriel and his brother Michael—the more scholarly and less adventurous of the two—are approached by a beautiful woman delivering a package to Michael. Before she can make the drop, she is interrupted by a group of armed men disguised as waiters. Gabriel fights off the men, but not before the package is broken and the woman is kidnapped. This is the opening salvo, which sets Hunt on a mission to find out who the woman is, and why she was kidnapped.
Hunt at the Well of Eternity is pure pulp adventure. The story is fast and exciting. The prose is simple (delightfully so) and straight forward. Hunt is a larger than life character who carries an old Colt .45 Peacemaker with walnut grips, and two fists made for thumping. The plot is linear and supercharged. There aren’t many surprises, but the action is brisk, and the story is a riot. It is pure adventure, and overwhelming fun.