Getting It On by Bev Vincent 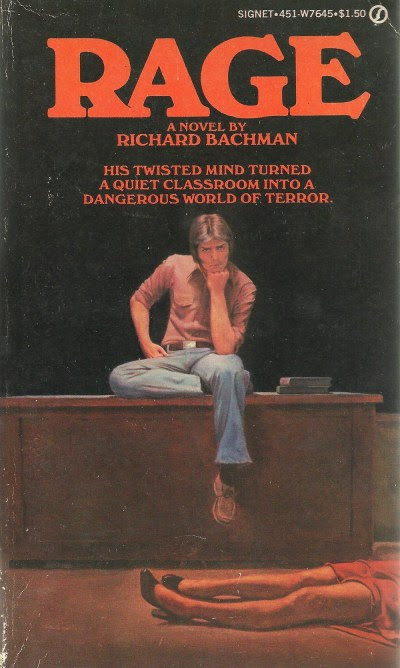 GETTING IT ON by Bev Vincent
Ed here: Cemetery Dance Publications now has a
website devoted to the work of Stephen King. Really
fascinating history and commentary.
Here's mystery fiction's own Bev Vincent
with a particularly fascinating take on one of
Stephen King's earliest novels.

December 30, 2014  Bev Vincent  Historical Context Essays
Stephen King wrote the first forty pages of the novel that would later be published as Rage in 1966, when he was a senior in high school. One source claims the original title Getting It On was inspired by the T. Rex song “Bang a Gong (Get It On).” The timing is right: In 1970, King found the incomplete manuscript of Getting It On “moldering away” in a box in the cellar of the house where he grew up, and he finished the novel in 1971, when that song was a hit.
In his essay “My High School Horrors,” King discusses his constant fear of being alone and not being able to connect with people or make friends while in high school, and of being afraid but not being able to tell people he was afraid. Rage arose from the same sense of being an outsider as did Carrie.
Getting It On was almost his first published novel. Rather than submit it to the slush pile at Doubleday, he found a current novel that was similar in tone and sent it to “the editor of The Parallax View,” hoping that would get him a step farther up the submission ladder. As it happened, that editor wasn’t available so the manuscript was passed on to Bill Thompson, who remembers the book as “a masterful study in character and suspense, but it was quiet, deliberately claustrophobic and it proved a tough sell within the house.” Thompson requested three rounds of revision, but ultimately Doubleday passed on it. In his formal rejection letter, Thompson offered to send it around to other publishers.
After he had a few books out and had developed some name recognition, King asked Doubleday if they would release some of his earlier books. However, Doubleday didn’t want to saturate the market by issuing more than one new book a year. There was a belief in publishing at the time that there was a limit to how many books by an author readers were willing to buy in any given year. New books cannibalized the sales of recent ones, and everything suffered. That was the theory, anyway, and Doubleday wasn’t willing to test it.

Instead, King sent Getting It On to Elaine Koster, his editor at NAL who had purchased the paperback rights to his Doubleday novels for enormous sums. The plan was to issue it under a pseudonym to see if it would find its own audience without the benefit of King’s name.
Richard Bachman wasn’t King’s first choice for an alias. He first submitted Getting It On under the name Guy Pillsbury, his maternal grandfather’s name. However, it quickly became an open secret within NAL that they had a new Stephen King book. He withdrew the manuscript and resubmitted it with a different title, Rage. Pressed to come up with another pen name on short notice, he drew upon two things in his immediate vicinity. Richard came from a book on his desk by Richard Stark, a pen name used by Donald Westlake, and Bachman came from the record that was playing on his stereo at the time: “You Ain’t Seen Nothin’ Yet” by Bachman-Turner Overdrive.
Published without any promotion as a $1.50 mass market paperback in 1977, eight months after The Shining, Rage was relegated to book racks at drug stores and bus stations. Novels like these had short lifespans—a couple of months and they were gone. The book didn’t escape all notice. It was reviewed in Publishers Weekly as the work of a fledgling writer. The unfavorable notice begins by saying that a lesson in Latin grammar would be more involving than what happens in Rage.
The book came back into print after nearly a decade in October 1985 as part of an omnibus edition that collected the first four Bachman books.[1]However, a number of incidents of high school violence became associated with the novel. It was found in the locker of one shooter, and another quoted lines from it. After being interviewed by the FBI, King decided enough was enough. Though there has never been any direct proof that reading the book caused the deranged individuals to behave as they did, he told NAL to withdraw Rage from publication in 1998. It has been out of print ever since.
Despite the rewrites he did for Doubleday, King says the book has a “smirky sophomore quality” to it. He wrote it, he says, with the same purpose in mind as the rest of his early fiction: to save his life and sanity. Why he felt so full of fury and terror—so crazy—at the time, he can’t recall, but given the problemsRage caused for him later in life, he advocates picking up a pen instead of a gun when someone feels out of control.
In his second introduction to the Bachman omnibus, King writes, “What gives me more comfort is the sure knowledge that the book was written with no bad intent, although it was written by a troubled eighteen year old boy-man who seems a stranger to me now; that boy-man was really neither King nor Bachman but a weird (and perhaps dangerous) hybrid of both.”
Would King’s career have been different if Doubleday had published Getting It On first instead of Carrie? Perhaps a little, King says, but “in the long run, the monster would have come out.”
[1] Many readers who know these novels only from The Bachman Books collection mistakenly refer to them as novellas, since they are comparatively short and the omnibus is reminiscent of books like Different Seasons or Four Past Midnight.
The complete list of the books to be read can be found on the Stephen King Books In Chronological Order For Stephen King Revisited Reading Lists page. To be notified of new posts and updates via email, please sign-up using the box on the right side or the bottom of this site.
Posted by Ed Gorman at 11:13 AM