As I've mentioned here before I was never able to finish writing a novel until my good friend Max Allan Collins allowed to read his books in manuscript.  Seeing them in typescript was a less intimidating way of trying to comprehend what made them work. I filled most of a notebook with my observations and scenes that I'd Xeroxed.
This was back in the very early 80s. Around that time I also happened to read a piece by the late Harry Crews about how, in order to comprehend a novel for himself, he read a Graham Greene book and then outlined it not only by storyline but by how many characters were in it, what purpose they served, theme, scenes that worked particularly well, etc. I'd done the same thing with (Al) Max's books but not in such an organized fashioned.
Enter Collins number two.
I was at a large library used book sale one September afternoon during this same period and found a mint condition copy of a hardcover mystery novel titled CUT ME IN by one Hunt Collins.
Now as I reader of science fiction from 1952 or thereabouts I recognized the name immediately. (I was no dummy; wasn't I in the Cosmic Space Club along with two guys named Bill Crider and Roger Ebert?) Ed McBain/Evan Hunter was Hunt Collins. I bought the book and gave it the Crews treatment.  I outlined the hell out of it.
Enter McBain. Or rather, enter Charles Ardai and Hard Case Publishing. 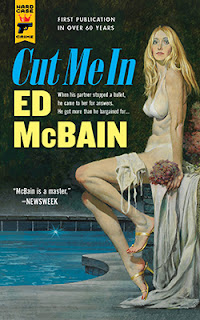 Yep, it's now where it belongs. With a great
Robert McGinnis cover and under the name that became even more famous than Evan Hunter.

Essentially, it's a work novel. Josh Blake
is a literary agent who works for an agency
that bears resemblance to the late
unlamented and notorious Scott
Meredith Agency (yes, the one where
Lawrence Block, Donald Westlake
and Barry Malzberg Salzburg all
worked at--see Mystery Scene website
for some of Block's memories).

The agency stuff is a lot of fun and the
story is pure 50s. Who knew there
were so many fabulous willing babes and
so many potential killers as Blake
discovers following the murder of his
his partner in the place?

I enjoyed the hell out of it not
because it's a masterpiece but because
it is one of those books that remind me
of where so many writers of my generation,
certainly me, came from. And the `50s
ambience if just right.

For one thing those Jack Webb
"Dragnet" dialogue patterns that Hunter
was to make his own are here on full display.
And Blake is such a solid take on the
post-war hardboiled heroes. He is a
lot like the protagonists of such
novels as THE MAN IN THE
GREY FLANNEL SUIT--troubled,
uncertain, angry. Except of course
the Madison Avenue men didn't
run about solving murders. They were too
busy playing Mad Men.

You'll enjoy this novel as
much as I did.

Thank you, thank you, and thank you! Within that redundant gratitude is my appreciation for a solution to my "writer's block": I will "outline" something by Graham Greene, Collins, or McBain. "Studying" structure by someone else might get me off my ass. Onward!

Ed, I seem to recall that Harry Crews wrote a novel about a guy who ate an automobile. (Like the Johnny Cash song, he did it one piece at a time.) It seems somehow in line with his method of eating and digesting a novel in order to see how it worked.

I very much related to your having benefited from reading a novel in manuscript, as I has a similar experience with screenwriting. Reading a screenplays was ever so much more instructive than going to the movies, because that way I was examining what I would be required to produce. I wasn't going to write a movie, after all, but a screenplay—words on a page. Reading someone else's words on a page gave me a much better sense of how to proceed.

I got a kick out of this one, too, Ed, and I'm sure glad that Charles Ardai has brought it back for us.

What was the Cosmic Space Club? Associated with one of the tv shows?

And isn't it odd how much the Apple spellcheckers want to make Malzberg into Salzburg?

The Cosmic Space Club was a feature of Amazing and Fantastic magazines in the mid-Fifties where (basically) teenagers would sign up to become pen pals. That's where I met Roger Ebert and years later we went to our first sf convention together. Imagination and Imaginative Tales did their version of it, too,I know Bill Crider has said he was a member, too. The Club promoted me to publish the first of my three fanzines. And yes i didwear a whirly-beanie.

I know the Barry Salzburg thing drives me fricking nuts. But then I've long been ready for a rubber room anyway. :)