Normally I would just provide a link, but this BETTER DEAD review from Ed Gorman’s blog is so smart and trenchant (not a word you hear much these days), I just had to share it with you here. By way of full disclosure, Ed and I are friends, but we are also genuine fans of each other’s work.

BETTER DEAD
In 1983, Max Allan Collins created a brand new sub-genre, something very few writers have ever done. In TRUE DETECTIVE, his first Nathan Heller novel, he wedded the street-wise private detective novel with the historical novel.
The advantages to this approach were enormous. The big blockbuster historical novels were all too often stagey and wooden. Heller not only brought a sense of humor to the dance, he treated the historical figures he dealt with as human beings who farted, told dirty jokes and had the kind of mundane personal problems the big blockbusters never dealt with. In other words, he brought reality to the table.
In BETTER DEAD Heller is hired by Senator Joseph McCarthy to prove that all the victims Tail Gunner Joe is pursuing are actually “Commies.” His particular interest is Julius and Ethel Rosenberg, who sit in prison awaiting their execution. This is just how I imagined McCarthy, a drunken, ignorant Mick rummy bent on achieving massive power. He is assisted in this by none other than Roy Cohn, a vile and treacherous figure who just happened to be (half a decade later) one of Donald Trump’s mentors.
But Heller also signs on to help an ailing Dashiell Hammett find evidence that the Rosenbergs have been set up and are innocent.
Collins recreates the Zeitgeist of the era very well. Yes, there were a lot of Communist sympathizers back then, mostly older men and women, intellectuals often, who saw the suffering during the Depression and thought—mistakenly—that Communism was the solution. (I started college in 1962 and took a history class from an elderly professor who was still a Stalinist, despite the fact that we now knew that Uncle Joe Stalin had slaughtered millions and millions of his own people.)
But these weren’t “Communist agents,” just disillusioned intellectuals (the Coen Bros. wittily address this in their latest film “Hail Caesar”).
Collins’ sociological eye never fails. Here’s a description I’ve now read three or four times just because I enjoy it so much. Heller is in the Bohemian heart of Greenwich Village.
“The clientele this time of time of night was mostly drinking coffee, and a good number were drunk, some extravagantly so as artists and poets and musicians sang their own praises and bemoaned the shortcomings of their lessers. These were self-defined outcasts, their attire at once striking and shabby, drab and outlandish.”
Bravado writing on every single page.
Max Allan Collins not only created a new sub-genre—he is its undisputed master.
* * *
Speaking of BETTER DEAD, we are sitting at five reviews on Amazon. We sure could use some more (same for THE BIG SHOWDOWNand MURDER NEVER KNOCKS).  ANTIQUES FATE is doing better at twelve reviews.
For those who have not written reviews at Amazon and/or Barnes & Noble before, you don’t have to be Anthony Boucher – just a couple of lines expressing your opinion is all that’s necessary. But more is welcome. 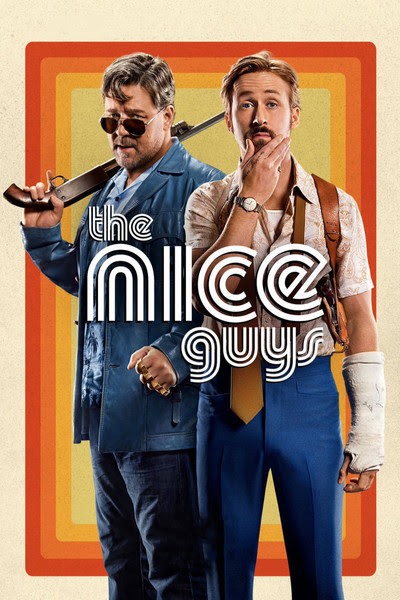 Here’s a movie you need to go to: THE NICE GUYS.
If you, like me, consider Shane Black’s KISS KISS BANG BANG (2005) the best private eye movie of recent years, you will be a porker in excrement at this one. Set in 1977, the script co-written by Black nails the era to perfection, paving the way for outstanding art direction.
But you won’t go home whistling the sets. The plot, which has to do with the murder of a porn star, is a twisty thing where the detectives mostly stumble onto the clues, but you’ll only be amused. The dialogue has a witty, naturalistic bounce that stands apart from the story, reminiscent of my favorite TV show, ARCHER. And it’s rare that a crime film can be this funny and yet be so tough. There’s a lot of Spillane in this one, particularly by way of Russell Crowe, heavy-set and menacing and rather sweet.
Crowe and his co-star Ryan Gosling are the surprises here. I thought Gosling was an empty pretty boy until I saw him on SNL a while back and he was funnier than the cast. Here he is hilarious without shortchanging the character. I knew I liked this movie, but I loved it when Gosling found a corpse and did a tribute to Lou Costello by way of his “Hey Abbott!”-type reaction.
Warning: it contains lots of nudity and blood splattery violence, and by “warning” I mean “recommendation.”

* * *
Here’s a really nice and very smart review of MURDER NEVER KNOCKS.
Check out this terrific review of the Ms. Tree novel, DEADLY BELOVED.
Finally, you may get a kick out of this look at the Bradbury Building, home of Nate Heller’s LA office. I participate in the comments section.
M.A.C.