Survivors Will Be Shot Again by Bill Crider 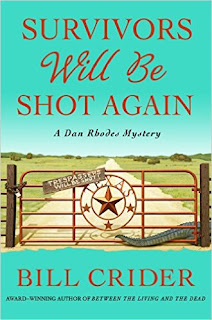 Bill Crider's new Survivors Will Be Shot Again may be my favorite of all the Sheriff Dan Rhodes novels for two reasons.

If you think Crider was funny before wait until you read the scene where Rhodes walks into a convenience store and goes into a mental rage about how Dr. Pepper refuses to sell the original sugar DP on line. He is obessed at the moment. Good thing he comes to notice that he has walked into a robbery. Ultimately he has to take the gunman's weapon away by throwing a loaf of bread at him. That's the first chapter.
The regulars are at their best and or worst.
The enterprising young woman who got laid off as reporter on the local weekly is back again with her very successful online newspaper of newissh kinds of stories that  she sometimes "enhanced" for the sake of excitement. She has turned the mild mannered Rhodes into a local bad ass of heroic stature.
Hawk and Lawton, the two elderly deputies who who make Rhodes' day miserable by trying to force information out of him by withholding other information ("in the loop") from him.
Seepy Benton, erstwhile community college professor and very very amateur crime solver, is pushing what was originally a ghost repellent spray but will also work if nudists are invading your domicile.
Wal Mart-- there are so many references you get the feeling that Wal Mart is  the official church of the small Texas town.
And lest I forget...the discovery of several illegal marijuana patches...guarded by junior sized alligators.
Then there is the A storyline. There have been breakins on ranch and farm buildings. Curiously one of the men whose outbuilding had been broken into and robbed is found murdered in a building owned by another man who had been robbed earlier. Given the material that gets taken the robberies are peculiar indeed.
Bill Crider writes some the finest traditional mysteries around. He is a first rate plotter who also knows how to pace his material. Such a mixture of mystery, humor and even an occasional horrific moment give his work its unique mastery.
2
I grew up reading the now mostly forgotten Sinclair Lewis  He frequently wrote about small towns and their social ways in the 1920s and 1940s especially. He was both brutal and hilarious. His one novel that is still taught in college (several famous workshops won't teach him because he was allegedly a bad writer line by line) is Babbitt. The story line paints a portrait of boorish "booster" who extols those American virtues that are actually American vices. But there are three scenes in which Lewis forces you to at least understand Babbitt to some degree and after you read them you can't quite find him as repellent as you once did.
Bill Crider does the same thing here with his supsects. They are not likable. But as Crider reveals their back stories you see that in some way they are broken men.
Perfecto.
Posted by Ed Gorman at 9:27 AM

I always anxiously await the new Dan Rhodes novel, and this one sounds great.

Love the title, love the series and loved Sinclair Lewis. Does anyone know who he is today?