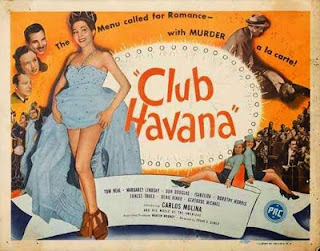 I heard about the movie DETOUR and its director, Edgar G. Ulmer, for years, and when I finally got around to watching it, I liked it a lot. Now I’ve watched another Ulmer film, the much more obscure CLUB HAVANA, and it’s . . . interesting.

CLUB HAVANA is basically a Grand Hotel sort of movie, introducing the viewer to a number of different characters who show up at the opulent Miami nightclub of the title. There’s the idealistic young doctor, the married couple on the verge of breaking up, the middle-aged society woman with three very creepy grown children, the gangster who’s suspected of murder, the piano player, assorted other musicians, the somewhat shady switchboard operator . . . You get the idea. Ulmer gives each of these characters a little time in the spotlight, so to speak, and then lets them interact and their storylines intertwine.

The biggest problem with this movie is that at 62 minutes, it’s just too short to do justice to all the plot that Ulmer tries to cram into it. Watching it you get the sense that if it had been thirty or forty minutes longer, it would have been a much better movie. As it is, it’s really rushed, and the fact that at least ten minutes get taken up by a couple of musical numbers doesn’t help matters. Still, there are some striking scenes and genuinely suspenseful moments. The big ending, which takes place in the club’s parking lot, is marred by photography that’s too dark and murky to tell what’s going on most of the time.

Tom Neal, one of the stars of DETOUR, plays the young doctor, and while Neal’s tragic personal life later on inevitably resonates for the modern viewer in these early roles, he’s not given much to do here. Marc Lawrence as the gangster turns in the best performance and the movie would have benefited if his role had been bigger.

Overall, CLUB HAVANA would have been better if it had been longer and had better production values . . . but if it had had those things, then it wouldn’t really be an Ulmer film, now would it? This one’s hard to find, but if you come across a copy it’s worth watching, as a curiosity if nothing else.