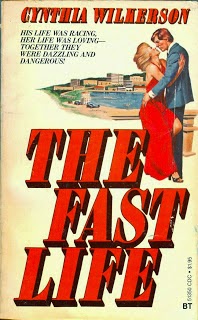 The Fast Life, by Cynthia Wilkerson
No month stated, 1979  Belmont Tower Books
The second of two novels Len Levinson wrote as Cynthia Wilkerson, The Fast Life is nothing at all like its predecessor, Sweeter Than Candy. Whereas that earlier novel was a sleazy yet goofy tale of a Manhattan-based harlot, this novel is more akin to a category romance, or at the very least something like Jacqueline Susann might’ve written. It’s also longer than the average Belmont Tower book of the day, coming in at only 318 pages but with fairly small print.
Like Sweeter Than Candy, The Fast Lifefeatures a female protagonist, but this novel is told in third person. Our hero is Roni Woodward, a 22-year-old blonde knockout from Savannah, Georgia who has just graduated college and is taking a leisurely tour of Europe with her wallflower of a cousin. On the first page of the novel Roni is in Paris and meets Chaz Razzoni, an Italian in his 40s who is internationally famous as a Grand Prix racer, though Roni has never heard of him.
Chaz is described as a sort of European dandy, a veritable greasy lothario, but he has his European ways with women and Roni, despite herself, feels drawn to him. He promptly begins hitting on her; the first several pages are comprised of their first conversation, in a café on the Champ Elysees. Chaz for his part feels drawn to Roni, and not just due to her stunning looks and awesome boobs. He senses something different about her, a fire burning within her that is much like his own. She’s also, he later professes, just as self-involved as Chaz himself is.
I might not be an internationally-famous sports celebrity or an Italian lothario, but I am around the same age as Chaz, and I at least would know that Roni spells nothing but trouble. When Chaz picks her up in his Guastalla 450 GT (Guastalla being the Lamborghini-like manufacturer Chaz races for) for their first date, Roni claims that she used to drive her now-dead brother’s stock car, back in Georgia, and says she wouldn’t mind driving Chaz’s car. When Chaz doubts her skills, this leads to a huge breakdown on Roni’s part, demanding that Chaz let her out, even grabbing hold of his wrist and tearing into him so savagely that she draws blood.
At this point I would’ve hooked a U-turn and dropped her ass back off at the hotel.
But Chaz shrugs it off and indeed feels bad about it. Wanting to get this off their collective chests as soon as possible, he forgoes the party they were headed for and instead takes Roni to a nearby racetrack. There he allows her to take his Guastalla for a few spins around the track. One thing to note about The Fast Life: unlike the other novels I’ve read with racing protagonists, such as the Don Miles and The Mind Masters books, this book actually does have a lot of racing stuff in it. In fact there are racing scenes that go on for several pages.
The first quarter of the novel documents Roni’s introduction to the European jet set of the mid ‘70s. (Interestingly, we aren’t informed until page 212 that all of this is occuring in 1974, the same year as a few of Len’s other books, for example The Bar Studs and Bronson: Streets Of Blood.) She instantly butts heads with most of them, in particular the Countess to whose castle Chaz takes her to on their first date. Here also Roni meets other characters who will gradually become important in the narrative, in particular Bobby Barnes, a 23 year-old American Grand Prix champion who races for a British team, and Gilles Cachen, a mean-looking Frenchman who races for Guastalla.
Roni’s brother Allan was as mentioned a stock car racer, and died in a wreck; Roni due to this (and other reasons) has kept herself from being interested in racing or from letting herself go and enjoying life. But Chaz opens this world back up for her, and she finds that she still wants to race, especially after driving his Guastalla. And after, uh, driving Chaz himself (in the first of the novel’s few graphic sex scenes – which by the way are nowhere as sleazy and explicit as in Sweeter Than Candy), Roni not only becomes Chaz’s new woman but also talks him into letting her drive one of his starter race cars.


Len offered to write his current thoughts on The Fast Life, and I was especially interested to read them, given that he hadn’t read the book since he wrote it so long ago:

Lev Levinson:
As I write these words, I have no idea what Joe will think of The Fast Life by Cynthia Wilkerson, who in real life is none other than me. He probably hasn’t completed his review yet, but asked in advance for my thoughts on this old novel of mine.
So I read it for the first time in around 37 years and actually considered it great. In fact, it was so great I couldn’t believe I wrote it.
That’s not to say it’s perfect. It’s far from perfect. It’s main problem is some sentences carrying unnecessary words. I should have tightened those sentences, or perhaps they were tighter in my original manuscript but line editors added words to comply with grammatical rules no longer considered necessary by me.
I was especially pleased to note that The Fast Life lacked the extreme vulgarity that has undermined some of my other novels. Evidently I tried to take the high road this time, but that doesn’t mean the narrative lacks melodrama or even a few choice romantic or erotic interludes.
The genesis of The Fast Life started with another of my novels,Sweeter Than Candy also by Cynthia Wilkerson. And Sweeter Than Candy began with a meeting in the office of my then editor at Belmont-Tower, Milburn Smith. He asked me to write an erotic story from a woman’s point of view, similar to Blue Skies, No Candy by Gael Greene which was on bestseller lists and considered a great feminist novel, much discussed and chewed over in the media. Essentially, Milburn was asking me to knock off Blue Skies, No Candy.
So I wrote Sweeter Than Candy and delivered it to Milburn, who some time later said he was pleased with it. The novel eventually was published, and several months later I was again sitting in Milburn’s office. In the course of conversation he said: “Why don’t you bring back Cynthia Wilkerson? She was a good old gal.” He specified a word count longer than usual, probably around 90,000 words as I recall, so they could charge a higher price. Evidently Sweeter than Candy was selling well enough to justify another Cynthia Wilkerson extravaganza.
So I walked home from Milburn’s office on Park Avenue South to my pad on West 55th Street near 9th Avenue, wondering what in the hell to write about. Finally I decided to take on Danielle Steele, Jackie Collins and all the other soap opera literary queens, and beat them at their own game, writing a contemporary women’s novel that would surpass anything they did, thus propelling myself to the top of the best-seller lists, earning millions of dollars for myself and my various insatiable appetites.
Then I made what might have been my first mistake. I had long been interested in Grand Prix racing, and decided to set the narrative against that glamorous background. It didn’t occur to me that potential women readers of The Fast Life probably weren’t as passionate about exotic cars as I.
If I had any brains, I would have set the narrative in the movie world in which I used to be a press agent, which also was the world of Jackie Collins. But I’d recently written a novel about that world entitled Hype! by Leonard Jordan and didn’t want to travel the road again so soon.
For research, I had long subscribed to Road and Track magazine and knew a lot about Grand Prix racing. One of my closest friends had raced on the same team as Paul Newman. Sports car racing seemed incredibly exciting and sexy, because there were lots of gorgeous international jet set groupies.
So I sat down and wrote The Fast Life about an ambitious young American woman named Veronica Woodward, or Roni for short, whose brother had been a NASCAR driver, and she’d also driven NASCAR cars. As the novel opens she’s touring Europe with a cousin, meets a famous Italian racing car driver at a Paris cafe, and eventually he helps her get into Grand Prix racing herself after they fall in love or lust.
In my opinion, the narrative moves swiftly and never slacks off. Yes, The Fast Life is as melodramatic and lurid as any other Len Levinson novel, but thankfully not in the sewer like some of them. I thought Roni was a complex character, not just a silly chickie with delusions of grandeur. Having not read the novel for so long, I forgot its twists and turns and how it ended. Reading it yesterday and today, I thought it suspenseful, realistic and psychologically engaging. I couldn’t put it down. The actual racetrack scenes were especially exhilarating. What a wonderful movie it would make.
I admit that I’m proud of this novel. With slightly better editing, a high class cover, and a more prestigious publisher with greater marketing power, it might have sold a few hundred thousand copies and accelerated my career in an entirely new direction. I’ll bet people who read it never dreamed that Cynthia Wilkerson had (and still has) a beard.
Unfortunately The Fast Life no longer is in print or available as an ebook. I just googled it and discovered a used copy going for $26.00.
Finally, here’s a bonus cover – in March 1985 Belmont Tower reprinted The Fast Lifethrough their Leisure Books imprint, something Len was not aware of until I brought it to his attention. Here’s the cover: 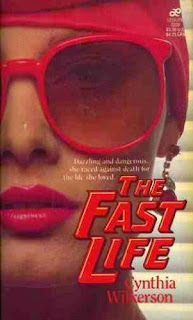