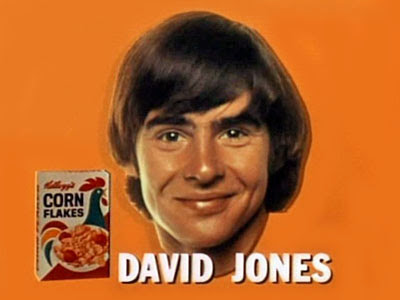 From Mark Evanier's New From Me about Davy Jones:

What makes it doubly-sad is that some of us got to meet him just 18 days ago at the Hollywood Show out in Burbank. He had a long line of autograph-seekers and folks who just wanted to meet him and tell him what his work meant to them. As I explained here, he could not have been more gracious and nice to his fans. Shelly Goldstein (seen in a video not far below these words) was one such admirer. She complimented him on his work on stage in Oliver! and he started singing a song from that score for her, a cappella and all the way through to the end. An hour or so later, he saw her walking by and he sprinted out from behind his table to gift her with a CD he was selling there that contained a medley of Oliver! tunes. She was amazed not only at his generosity but at the sheer fact that he remembered her and thought to do that. What a shame to lose someone that charming.

Ed here: I was never much of a Monkees fan but I thought Carol King wrote some good songs for them. I've read so many conflicting reports about who actually played on the Monkees records--the Monkees of course insisted they did but many many studio musicians have claimed otherwise--that I guess it's impossible to know for sure. But Mark's memory of him is certainly a warm one and an especially nice tribute.

When I told my editor Linda he'd died she was upset. "He was the boy all the eighth Catholic girls wanted to date!" Not Bobby Sherman? :)
Posted by Ed Gorman at 12:19 PM

The movers behind the show included Don Kirshner, Bob Raefelson, and Bert Schneider, not a shabby lineup. Besides King, Kirshner also lined up some other former Brill Building talent: Neil Diamond, Boyce & Hart, Jeff Barry. There used to be a story that Charles Manson was one of the people who tried out for the group, but I see that's now said to be an urban myth. I enjoyed watching the show in high school, and 20 years later, when the series played in syndication, my kids were fans -- my older daughter even went to one of their concerts.

I confess to having enjoyed the Monkees!