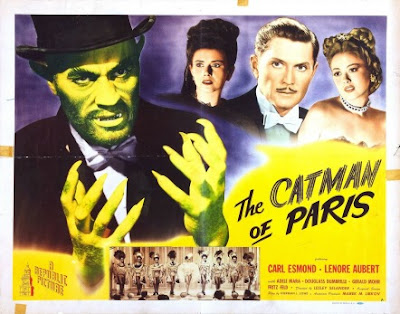 Ed here: Having grown up on Gene Autry, Roy Rogers, Rocky Lane, etc. I saw two or three Republic Pictures every Saturday afternoon at the dime theater. Here's an excellent overview of the company's horror output from TCM Movie Morlocks.


Yes, I am a proud Republican… and by that I mean I am a proud fan of Republic Pictures, the little studio that could. And by could, I mean could produce low budget genre movies that stood toe to toe and title to title (if not in grandeur, then at times in mass appeal) with the offerings of the big Hollywood studios. Founded in 1934 by Herbert J. Yates, owner of a film processing laboratory to whom several “Poverty Row” production companies were in debt, Republic came into being by consolidating the assets of six cash-strapped outfits (Monogram, Liberty, Mascot, Majestic, Chesterfield and the unfortunately named Invincible) to become something like a B-movie supergroup. Over the years, Yates’ s conscripts would break away from the Republic stranglehold, either re-establishing their brand (as did Monogram) or splintering off to be absorbed elsewhere within the industry. Known for its westerns and movie serials, Republic Pictures gave cowboy actors John Wayne and Roy Rogers career leg-ups while auteurs such as John Ford and Fritz Lang also put in their time there. I noticed recently that Netflix was offering streaming options for a number of Republic horror titles that had long eluded me, so I made a date with myself to see if these films could repay over 40 years of curiosity.

I first read about THE VAMPIRE’S GHOST (1945) in Alain Silver and James Ursini’s The Vampire Film. The oft-updated overview was published originally in 1975 and, along with David Pirie’s The Vampire Cinema and Barrie Pattison’s The Seal of Dracula, it proved invaluable for turning me on to scads of vampire movies that had not then crossed my path, like Roger Vadim’s ET MOURIR DE PLAISIR (BLOOD AND ROSES, 1960), Robert Hossein’s LE VAMPIRE DE DUSSELDORF (THE VAMPIRE OF DUSSELDORF, 1965), Jess Franco’s VAMPYROS LESBOS (1970) and this little number from director Leslie Selander. Known best for his westerns, Selander was prolific and flexible during his long career, tackling various genres with a consistent level of professionalism. (Selander’s output ran apace with Lambert Hillyer, who helmed DRACULA’S DAUGHTER.) THE VAMPIRE’S GHOST has a great look, set as it is in an African port town where the locals are dying off, their corpses discovered drained of blood and marked by curious punctures in the throat. Following as it does Universal’s many sequels to DRACULA (1931), which culminated with HOUSE OF DRACULA that same year, the script for THE VAMPIRE’S GHOST by former pulp novelist John K. Butler and Leigh Brackett (whom John Carpenter thought so highly of that he named the sheriff in HALLOWEEN after her) dispenses with all mystery from the jump, kicking things off with a confessional opening narration (“I cannot die! I cannot rest!”) spoken by vampire-at-large Webb Fallon (John Abbott). Lots of genre critics have fallen down hard on Abbott’s performance, wishing a more dynamic actor had played the tormented Fallon, but I’d counter that perhaps Fallon wasn’t meant to be Count Dracula but just your average 16th Century dude cursed with immortality for killing a chick and chilling out in equatorial Africa where nobody cares how many villagers you tap. Silver and Ursini note that the character bears more of a resemblance to John Polidori’s The Vampyre or James Malcolm Rymer’s Varney the Vampire than Stoker’s immortal creation and if history has taught us nothing else it has proven that ineffectual little men can do a world of damage when right-minded folk aren’t paying attention. If Abbott strikes some viewers as second string, he walks tall among a dull supporting cast (Grant Withers is a near non-entity as the local priest) while the jungle setting and use of native bearers (among them I WALK WITH A ZOMBIE‘s Martin Wilkins) as the first to realize there’s something unearthly about Webb Fallon (and take proactive steps to do something about it) give THE VAMPIRE’S GHOST novelty. If anything, the film suffers from a lack of ambition; though Fallon claims his victims will rise from their graves, we never see that happen, which makes the film feel like a bit of a cheat, especially when you consider what a dishy vampira Adele Mara (SANDS OF IWO JIMA, CURSE OF THE FACELESS MAN) would have been.

Republic just wouldn't lay down and die, either, any more than some of those creatures...the banner was eventually revived, by NTA (once the Susskind organization responsible for GET SMART! and NYPD) for some of the best feminist noir (BOUND, FREEWAY) and similarly intelligent "women's" pictures (RUBY IN PARADISE, LIVE NUDE GIRLS) of the '90s...Aaron Spelling managed to cheapen it, pdq...surprise...

Republic put out some of the best horror films (and near horrors) of all the non-majors, but they got lost in the shuffle because the studio was among the first to release its movies to television. They were shown on TV in the fifties and then put aside when major studios began selling films to television. Even now, only some of them are available via streaming. I wrote "Republic Horrors, The Serial Studio's Chillers" and "Republic Mysteries, The Serial Studio's Whodunits!" to try to build momentum to get them back on the air, make them available on DVD, and hopefully get Netflix or Amazon to stream the full library. You can't believe how many great horror films and old-dark-house mysteries Republic made. It's a shame that so few are available.
Brian McFadden