Pulp Serenade: The Captain Must Die by Robert Colby 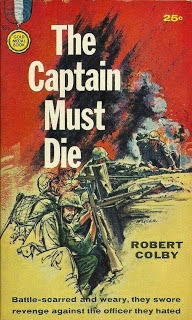 One of my favorite lines of dialogue from a movie—indeed, one of the most celebrated in all of film history—comes from Jean Renoir’s 1939 masterpiece The Rules of the Game. “The awful thing about life is this: Everyone has his reasons.” Depending on the translation you watch, the wording might be a bit different, but the significance and emotional wallop of the line never diminishes. It’s a sage, subtle piece of wisdom from one of the greatest humanist filmmakers of all time. It doesn’t excuse our foibles, fumbles, or fuckups, nor does it legitimize the terrible things people do, whether deliberate or accidental. The line does, however, cue us in to Renoir’s worldview, which is as attuned to the most lovable and admirable qualities of his characters as it is to the deplorable aspects. As Charles Silver wrote in his outstanding essay on the film, "Renoir is, after all, the most tolerant and humane of all artists, and his central message is a forgiving one: that everyone has his own reasons for his behavior, no matter how foolish or selfish."

Shades of Renoir’s maxim can be found in Robert Colby’s The Captain Must Die. At the end of his rope and with his back against the wall, Brick, one of the novel's main characters, yells out, “We got our reasons.” It’s a last-chance effort to justify the actions of he and his two cohorts. In an act of self-preservation they broke the law. And now they have to pay for it.

Originally published in 1959 by Gold Medal, The Captain Must Die follows three ex-GIs recently released from prison with a lingering vendetta against their former captain. After they track him and his wife to Louisville, the trio plots their bloodthirsty plan to terrorize the captain and get revenge for the 12 years they spent behind bars.

This is one of the most original and most compelling of the Gold Medal books that I’ve read. Colby mixes a superb suspense story with a sophisticated structure that, despite its complexity, reads smoothly and compulsively. Colby fragments the narrative, switching between the perspectives of all five main characters, and moving back-and-forth between time over the course of a few tense days.

By telling the story from multiple viewpoints, Colby accentuates the anxiety, paranoia, and resentment at the heart of each of his characters. They’re burdened by life’s myriad disappointments—loveless relationships, unfaithful spouses, crappy jobs, having to settle for less, and a host of other letdowns and injustices. Even the three GIs, though they are technically a team, can’t trust each other one bit. Everyone—the captain and his wife included—is worn down by resentment and bitterness.

When Robert Colby writes, “You played against trouble, forgetting that trouble held aces, too. And wore a poker face of danger,” he evokes Robert Burns’ famous quotation, “The best laid schemes of mice and men go oft awry,” albeit with a hardboiled twist. Noir anti-heroes try to beat the house at its own games. That’s why they are “heroic.” Of course, they can never win, because the house always wins. That explains the “anti.”

Ed Gorman first recommended this book to me, and his review really captures the fury and spirit of the book: “If you want a feel for the real Fifties in the form of a grim caper novel, this is your book. It's tight, deftly plotted and one of those hardboiled novels that is genuinely tough without showing off. There's a sweaty post-war anger on every page.” It’s been said that noir is the flipside of the American dream, and The Captain Must Die is proof of that.

Madge, the captain’s wife, illuminates one of the main themes of the novel as she tries to justify to herself the mistakes she’s made in her life, and the unintentional cruel consequences that followed:
“Yet in this life which fled so quickly must there always be an excuse for every action labeled by frail human beings – ‘wrong?’…. It was not an argument that would stand up in open society. It would not hold up in a court of law. But it was honest.”
At times like this, Colby's writing comes across like poetry with guts.

Though he’s never achieved the fame of his fellow Gold Medalists, Colby had a fierce talent and a gift for words, and The Captain Must Die is a hell of a fine accomplishment.

For more information, check out Peter Enfantino's "Robert Colby – A Tribute" over at Mystery File.

I read this after reading your review of it a number of years ago, Ed and have since collected and enjoyed most of Colby's work. He may not have been one of the most skilled and polished of the PBO writers of his era, but he certainly is among the most entertaining.