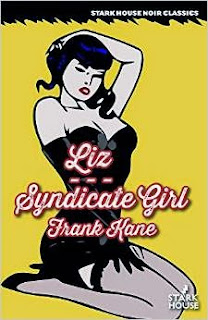 FRANK KANE
An Introduction by Robert J. Randisi
It starts with the name.
Frank Kane.
Frank.
Kane.
Two syllables.
Tough and lean, like the man’s writing.
No nonsense.
Plus, I think Frank Kane came along at the right time.
The private eye may have been born in the pages of the pulps. But he was formed, fine-tuned and perfected in the pages of the paperbacks (both original and reprint) of the 40’s, 50’s and 60’s. Kane’s contemporaries were Brett Halliday, Mickey Spillane, Harry Whittington, Lionel White, Gil Brewer, Frederic Brown, William Ard, and many others, including the other Kane, Henry. Of course, Spillane was at the head of the class, but all of these authors made their contributions to the genre, and certainly Frank Kane’s contribution was significant.
###
My own personal introduction to Frank Kane was a novel called BULLET PROOF, a 1961 reprint of one of his Johnny Liddell books. Liddell was a New York private eye who appeared in 29 novels from 1947 to 1967. Liddell is drawn in the quintessential P.I. mode—smart, tough, clever, good with the ladies and while Kane has been criticized for being formulaic, I find him to be at the top of the P.I. food chain. Yes, the P.I. genre is largely formulaic, but that formula was invented in the paperbacks of the 50’s (forgive me for repeating myself, but I believe in this point). It can be looked back on as—to use another word—“cliché,” but it wasn’t so at the time. Kane was right in there with the best of them, putting his stamp on the genre.
For me, the series had much in common with Brett Halliday’s Mike Shayne novels—beyond the fact that they were both reprinted in paper by Dell Books with great covers by the Roberts McGinnis, McGuire and Stanley, Ron Lesser and Harry Bennett, among others—in that New York was as much a character in the Liddell books as Miami was in the Shayne novels.
Also similar in style, tone and substance, was Henry Kane’s Peter Chambers series, which was also set in New York. Frank Kane, however, came to writing New York based P.I. novels armed with a wealth of experience and knowledge. He wrote for New York newspapers, eventually penning a column called “New York from Dusk to Dawn,” which followed Hollywood movie stars visiting Broadway.  The column later led to a radio show. He also spent some time working in Washington D.C. on the efforts to end prohibition, and spent much time writing radio scripts for THE SHADOW, GANGBUSTERS, MR. KEEN, TRACER OF LOST PERSONS, and many more popular programs of the time.
Kane also had a brother who was a New York City cop, which meant that his cops—unlike those in many private eye novels—smacked of more realism than most, rather than just being the private eye’s “chum.”  In ’47 he quit his radio job to start writing his Johnny Liddell novels. Johnny also appeared in countless short stories that appeared in pulp magazine and paperback collection such as JOHNNY LIDDELL’S MORGUE.(Dell, 1956). Later still, he went on to write for t.v..
CBS had approached him about a Johnny Liddell t.v. series, but they could not come to an agreement on terms. They did, however, form a working relationship and Kane wrote for the Mike Hammer’s Mickey Spillane series starring Darren McGavin—many of the scripts being adapted from Kane’s own short stories. He also wrote for shows such as Special Agent 7 and The Investigators.
The other similarity between the Mike Shayne and Johnny Liddell books is that they were both written in the smart alecky, almost arrogant vein that many of the 50’s and 60’s private eye series adopted—and fiddled with--and Richard Prather perfected with his Shell Scott series.  Kane, however, had more than that to offer, and that is what is represented herein with these two novels, SYNDICATE GIRL and LIZ.
###
SYNDICATE GIRL is a hard-edged crime novel that is significantly darker than the Johnny Liddell books. With this tale Kane shows his dexterity with the truly hardboiled form. No smart aleck wise cracks, no over the top gunsels or babes. It’s not forced, and the light touch of the Liddell novels is not missed. The cops, gangsters, the lawyers and politicians ring true, all drawn from Kane’s past experiences. He draws a successful, realistic picture of a city being crushed beneath the fist—not just the thumb--of a powerful syndicate, and not a private eye in sight to save the day. Instead, that task falls to a young district attorney.
With LIZ, still another side of Kane’s talent is shown. The main character is not a P.I., not a cop, lawyer, gangster or politician. It’s a beautiful young girl, fending for herself in a word of brutal men and venal women. Once again Kane illustrates the scope of his skill, telling most of the story from the point of view of the girl, Liz, who adapts to her surroundings, and becomes a girl who almost always gets her way.
And so the appeal of Frank Kane—to me, anyway, and perhaps to you—is that he is not a one-trick pony, as many of the others of his time were. Oh, they were all very good at that one trick, but Kane was facile with all of his. He proves this with SYNDICATE GIRL and LIZ, as you will see as you move forward.
My advice is to read and enjoy these two books, then go out and keep reading Frank Kane.
Frank.
Kane.
Good name.
Great writer.

Fredric Brown, whose name does tend to get typo'd, whose work I like best of that list.

Thanks for this. I didn't know Kane outside of the Liddell stories, which I remember primarily from my adolescence; the author's fondness for sentences lacking connectives such as and; my father's purchase of Kane paperbacks I eventually latched onto, and the author's penchant for redheads with "tip-tilted" breasts.

I'd rate Liddell as far less entertaining and exciting than the likes of Shell Scott, Chester Drum, and other fictional detectives of that era.

I've just read Liz in this edition and will probably post something about it soon. Thanks!