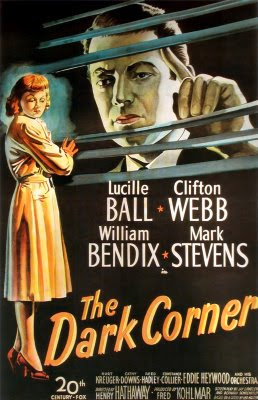 Ed here: These are two paragraphs from a review of the film The Dark Corner from Noir of The Week. I think these are interesting takes on early noir.

The first thing that struck me about this film is how so often in films from this era the boss and the secretary are inevitably linked romantically. It’s as though a man hires a secretary just to woo her and a woman seeks out a job in order to be wooed. It’s takes the concept of work romance to a whole other level. The Maltese Falcon remake Satan Meets a Lady (1936) comes to mind, with lusty Warren William drooling over his new secretary who has expectations of him but is dismayed to find he’s got a roving eye. It’s assumed that the secretary role is a temporary one; a sort of springboard into wifedom. The paint on the door isn’t dry yet and Bradford already starts the courtship process by taking her out to a penny arcade and she begins the seduction by not so coyly having him check out her gams when she complains about her stockings. Arranged or not, the chemistry is there. When they kiss, he is rough and she gives in. The kiss is passionate, a mixture of pleasure and pain. She leaves possibly with a bruise on her arm but inevitably with butterflies in her stomach.


If there is ever a child character in a film noir, be on the alert! No matter how small a role, that child’s function in the plot is infinitely important. They are the secret holders of crucial information. In The Dark Corner, a young girl with a whistle watches intently as the dirty detective in the white suit makes various phone calls throughout the movie. In her first scene, she is playfully blowing her whistle and the detective is annoyed and threatens her. In her next scene, she knows not to blow the whistle while he’s there and waits until he walks away, all the time listening to the details of his conversation. And in a twist that’s so film noir, she becomes a whisteblower and helps propel the story forward. She is the epitome of innocence which contrasts with the evilness of the dirty detective, making us loathe him even more.

The Dark Corner is a favorite hardboiled movie of mine--but Noir often gets lumped in with Hardboiled. The thing about Noir is that the guys are usually civilians, not cops, or P.I.'s. They're regular guys who get their asses in a sling, usually by following a woman. By that definition great stuff like Dark Corner and Out Of The Past are not really Noir.

Good point, Bob. I stand corrected. And yes I AM just as dumb as I seem.

A favorite hard-boiled/noir film of mine. Thx. It might be noted that Lucille Ball got top billing in this film. Mark Stevens, who plays her employer, comes in fourth.

The secretary and boss; the doctor and nurse; the coed male and female; getting a man seemed to be the only avenue to happiness then. But it worked for me!