The Mob In The Music & Night Club Business 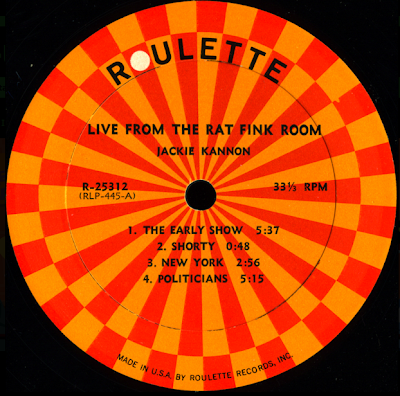 Ed here: This runs maybe seven thousand words. Thanks to my friend Marty Greenberg I got interested in the history of show business. This article deals with some of its most sordid and violent times. It's worth a glimpse anyway. Mark Evanier soffered a link to it on his blog..

"The record business in those days was Mob controlled. It wasn't a fun business to be in." - Dick Curtis, Comedian

"A lot of people didn't like [comedian] Jackie Kannon. They didn't like his toughness." - Sol Weinstein, Gagwriter

"Then there was Morris Levy's endless supply of special girlfriends and his passion for gambling and prostitutes." - Tommy James, Lead Singer of The Shondells

The Mob ran the record biz. During the height of America's nightclub abundancy, the ruthless owner of New York's Birdland and Peppermint Lounge was one of the most powerful men in the scene. Morris Levy used his clubs to promote the acts on his record label and he used his record label to exploit his clubs. Immersed in these two worlds, it was natural that Morris Levy would encounter every stand-up comedian in the business.

As television became common in the early nineteen fifties, the majority of radio programming moved to the visual terrain. The scramble to fill radio's dead air gave birth to the disc jockey and the pop music hustle. Morris Levy ensured that his label, Roulette Records, was there to fill the void. Radio became pop music's round-the-clock infomercial, dictating which tracks would sell in record stores. Morris Levy was a master at ensuring his artists got airplay. That mastery involved a faculty of full-time thugs and their impressive collection of bedraggled baseball bats.

Joey Dee and The Starlighters were one of Levy's most profitable acts. "I'd get in the limo with George Goldner, an employee," says Joey. "He'd drive. It would be a couple ladies of the evening, hookers, in the back of the limo and we'd drive to these towns. They'd meet with the deejays, give them an envelope with cash in it, allow them their way with the girls in the car, and then go on to the next town. And the next town. And the next town. Our records were played. God forbid they took the money and didn't play the records. That's when the baseball bats came out... and worse."

Between 1960 and 1966 the biggest fad going in the LP world was comedy records. Labels big or small, comedians hopelessly funny or just downright hopeless, pressed albums. Levy thought nothing of giving a disc jockey an envelope full of cash and yet, he denied his recording artists the same courtesy. Major acts like Buddy Knox or Jimmie Rodgers found themselves nearly broke while their names were at the top of the charts. The Roulette comedians didn't fare any better. Unlike the musicians that signed a slanted contract, Roulette's comedians had no contract at all. Many had their act recorded clandestinely - and released to the market without permission. Any other record label would have faced a major lawsuit. Roulette Records was different. You got a problem with us? That's fine. Soon you're gonna have a problem with your legs.