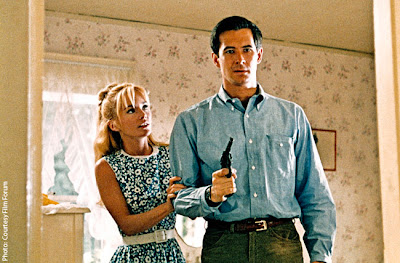 Ed here: One of my all time favorite movies. A true minor masterpiece.

This isn’t Norman Bates, however, but one Dennis Pitt, a “reformed” arsonist who, we ultimately learn, “accidentally” set his aunt on fire years ago. A child trapped in a man’s body, Pitt has an active imagination and lives in a fantasy world of his own making. He may be able to con his parole officer and the people in the quiet Massachusetts town he relocates to, but he will soon meet his match in the form of a gorgeous teenage cheerleader (Tuesday Weld, never better), who catches his eye. That’s the basic setup of PRETTY POISON.

Buried upon its release by antsy distributor 20th Century Fox, PRETTY POISON has continued to garner a cult rep ever since. Perkins is wonderful as the awkward but likable Pitt, who tries to make a go of it by toiling in a paint-manufacturing plant. Then he becomes smitten with the “innocent” Sue Ann Stepanek (Weld). Pitt seduces her into his imaginary world of espionage, and Perkins is quite charming and funny in the scenes of their unusual courtship, displaying none of Norman’s trademark nervous tics and stammers.

for the rest go here:http://www.fangoria.com/index.php/moviestv/fango-flashback/6523-fango-flashback-pretty-poison
Posted by Ed Gorman at 2:25 PM

How could you not like a movie with Tuesday Weld? She is mesmerizing.

Beautiful and brilliant as an actress. They just couldn't figure out how to use her I guess.

I've only seen this once, many years ago, but I remember I thought it was great.

A favorite of mine, too. Thanks.

The movie Pretty Poison is of a true crime that happened in Connecticut.Anthony Perkins is nothing in comparison to the actual person he portrays, nor is Tuesday Weld.