All The Way Chas. Williams & film version The 3rd Voice 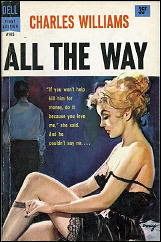 ● THE 3RD VOICE. Columbia, 1960. Edmond O’Brien, Julie London, Laraine Day. Based on the novel All the Way, by Charles Williams. Director: Hubert Cornfield.

This speculation began in a roundabout way while watchingDeadlier Than the Male (reviewed here ); I noticed that one of the credited screenwriters was listed as “Liz Charles-Williams.”

Hmmm. Seems to me the oughta-be legendary writer Charles Williams was doing things at Universal about that time: The Wrong Venus was being filmed as Don’t Just Stand There!, and wasn’t The Pink Jungle some of his work? So could “Liz Charles-Williams” have some connection with the author of Dead Calm and The Big Bite?

Well, after several minutes of painstaking research, I still couldn’t say, but I was prompted to pull out my video of The Third Voice and my copy of the Charles Williams book it was based on, All the Way, and revisit both. 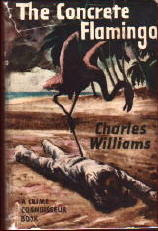 Williams’ novel is a compact, neatly built thing based around an intriguing premise: in order to commit the perfect crime, Jerry Forbes has to spend a week impersonating a man he doesn’t resemble… whom he helped murder.

The hook is that the victim is a neurotic Midwestern businessman on vacation in Florida, and Forbes’ voice sounds exactly like his, so the plot — hatched by the dead man’s jilted mistress — is to kill the businessman, then drain his accounts by phone calls to his underlings back home, all this with her help.

It takes talent to hold a complicated thing like this together in a novel, much less put it across in 160 pages, but Williams was at the top of his form here, with well-wrought characters and nicely judged situations that build suspense beautifully.

Hence All the Way emerges as a deft little book that deserves to be better known. I particularly liked the little character quirks that lead up to an emotional double-cross that you won’t see coming, even now that I’ve told you it’s on its way. 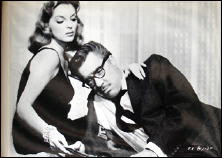 In 1960 Columbia filmed this as The Third Voice which may make it the first paperback original made into a movie; I don’t know. At any rate, while not quite up to the level of the book,Voice is a nice, sick little item which falls well short of Classic Status but still repays watching.

Voice was written and directed by Hubert Cornfield, who put some interesting things on film (Plunder Road, Pressure Point) before the experience of trying to direct Brando in Night of the Following Day crippled his talent.

Or maybe there wasn’t much talent to begin with: Cornfield’s films all look like the work of a promising new talent, but somehow he just never followed through. At any rate, The Third Voice is still nasty and promising.

It’s set in a swanky Mexican resort, but there are no sun-drenched views of lovely beaches; just lots of sweaty close-ups of Edmond O’Brien moving through rooms of cloying chintziness as he bullies strangers over the phone and plots his own little turnabout, leading to a typical noir ending. The effect is claustrophobic, but tellingly so, and I like this movie perhaps more than it deserves. 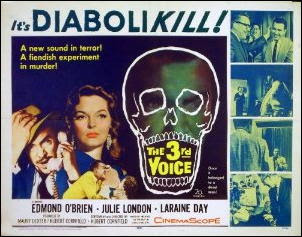