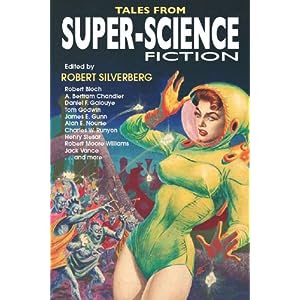 Ed here:
As I've said here before Graham Greene has written that he didn't reread many of the books he revered as a youth because in rereading them he'd spoil his memory of them as perfect. I think most of us has had that experience. You remember a book you read at fifteen as dazzling in both concept and technique only to read maybe thirty pages of it as an adult and find it clunky in every way.
I knew exactly what I find here. More, I knew what I WANTED to find here. And by the Spaceman's Oath I found it exactly. Outlandish and spectacularly colorful science fiction pulp adventure with the emphasis on pulp.
Robert Silverberg not only edited the book and contributed a story but also wrote the author notes, some of which are as interesting as the tales themselves. I didn't find any bad ones and just about all of them came through with flashes of that old sense of wonder. Gimme that sense of wonder, Doc; I gotta have that sense of wonder. I mainline it!
My favorites include Henry Slesar's "Who Am I?" Slesar wrote in every genre there is; he was a plotting master and that skill is clearly on display here. In his author notes about Don Berry Silverberg discusses Berry's too brief sf career; if you doubted that Berry had the stuff read "Song of The Axe" and you'll doubt no more. A few of my other faves here include the Daniel Galouye and the Jack Vance.
To quote an Amazon review:
"By the end of the nearly four year run of Super-Science Fiction magazine, an attempt to transform itself into some sort of monster mag was not working and the magazine folded. Robert Silverberg had three stories in the final issue under three different pen names. The story "The Loathsome Beasts" by Silverberg is from the last issue and is clearly a monsters in space story where sea monsters violently attack a planetary settlement. I liked it in a fun innocent times sort of way. A good finish for this collection of stories."
To complement the stories the complete run of covers are reproduced. Much of the work was done by Emsh (my favorite) and Freas.
What has always struck me about so called "juvenile" action adventure sf is how often it addressed contemporary political problems. Not in any obvious way but subtly and intelligently, Silverberg especially used the sub-genre to address geo-political concerns.
In all an extremely handsome book with interior illustrations from the magazine and stories for anybody who enjoys colorful pulp adventure.
Posted by Ed Gorman at 12:45 PM

I have all the issues of this magazine. I have a lot more nostalgia for the low-end mags than for the classy ones, for some reason. I loved that stuff as a kid, and still do.

I also have all 18 issues of the digest magazine but I had to get this great collection. Amazon.com has it for $32.00. An excellent, nostalgic collection.

Ed, I think one of the reasons I enjoy your work so much is that you and I have tastes that overlap a great deal, especially when it comes to the old science fiction and mystery pulps. This one is in my TBR stack, and I'm looking forward to diving into it.