Dark Night of The Scarecrow 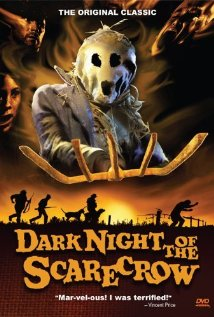 I happened to catch this when it first appeared as a TV movie. For me it was remarkable experience. Having lived in a few old fashioned boarding house where retired railroad workers and traveling salesmen (more like peddlers actually) co-habited for seven dollars a week (nine if you wanted meals) and shared the same bathroom I was surprised by how truthfully the movie got the character Charles Durning plays here so brilliantly. Long time bachelor, tavern gossip and scold, Dark Night shows us a man we've rarely seen on TV except on Andy Griffith where he was just one more oddball character looking for love. Here he's a malevolent  force. I saw this again a few years ago and it held up very well indeed furthering my argument that for all the trash the TV movies produced there were numerous gems that need to be made available again. So is it a great movie? Of course not but it's creepy as hell and every aspect of it works.

What reminded of Dark Night was a brief but telling review of it today on Singular Points. Here's an excerpt:

"I have some vague memories of watching 'Dark Night of the Scarecrow' back in the 1980s when it originally aired, but I didn't remember much about it. Picked up the DVD on the recommendation of John Hocking, who called the movie "the best made for TV horror film of them all." Have to say I'm in agreement. This 1981 TV movie manages to be that film rarity, a ghost story that works on all levels and does so with very little gore to speak of.
" The plot is simple. Four good old boys with a grudge against a local mentally challenged man called Bubba seize an opportunity to get rid of him permanently when it looks like he has savaged a little girl. They hunt the frightened man down in a field, where his mother has disguised him as a scarecrow, and shoot him. Only minutes after they've killed him they learn by CB radio that Bubba actually saved the girl from an attack by a vicious dog..."

for the rest go here :http://singular--points.blogspot.com/

I just remember how gorgeous the little girl was...WOW ! ! !.

Stupid title, terrific film. One of my all time favorite made for TV films. Very glad to see it's now available on DVD and getting some much deserved critical attention. And that it's among your favorites as well, Ed.

I hate sad endings but have enjoyed Charles Durning ever since he gave us, "Ooooo, I love to dance the little two-step..." in The Greatest Little Whorehouse in Texas. I haven't seen this film, but would do so only because I know Durning's performance will be durned good.

Actually it was "Ooooo, I love to dance the little side step." something we're gonna see a lot of tonite from one of the debaters.

This is a very good TV Movie! I remember watching it when it first aired too. Creepy film with good performances and excellent script. I guess since it takes place over a span of time calling it "Dark Night of the Scarecrow" isn't accurate like "Night of the Living Dead." However, CBS wanted something that immediately said scary movie. It certainly should air more around Halloween time as it is a great film to watch in the month of October . . . And any other month too!