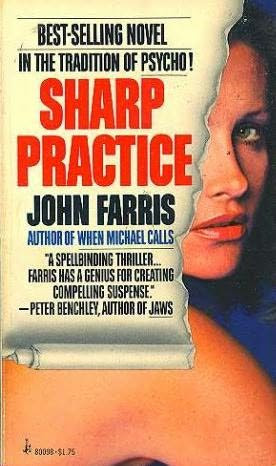 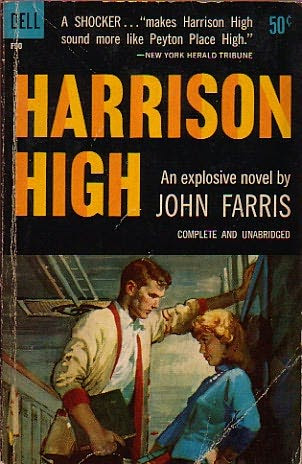 Let’s see. Sharp Practice by John Farris is a slasher novel. And it’s also a police procedural of a very British kind (though written by an American). A love story (the long-suffering wife of a cheating husband; the brother and sister who just can’t keep their hands off each other; numerous people lonely and neurotic in very modern ways). A gentle spoof of the hierarchy of academia. A look at the frustrations of a writer trying come up with another novel And of course a look at one of the most savage murderers in modern suspense fiction, though Farris is wise enough not to give us an autopsy. He’s Hithcockian in his belief that less is more. Praise the Lord.

And that’s just a partial list of the novel's elements.

It is also one of the most sophisticated, elegantly told and perverse novels of terror ever written. The surprises are so stunning that two or three times I had to put the book aside and take a little rest. There are three twists in this novel that are so cunningly wrought they will shock even the most jaded reader.

That’s all I’m going to say about Sharp Practice. Read it and you’ll see that I’ve understated my enthusiasm for its suave brilliance.

So instead of a book report I’d like to turn to Mr. Farris himself.

"It has just occurred to me that John Farris has one of the longest careers of any mystery writer still active. His first novel, The Corpse Next Door, was published by Graphic Books, a small but solid line of mostly paperback originals, in 1956. Farris was born in 1936, so if the book wasn’t published until he was 20, the odds are the most of it was written when he was still nineteen.

"He switched to the pen name of Steve Brackeen for his next few books, typical Gold Medal thrillers, except that Gold Medal didn’t do them. One of them, Baby Moll (Crest, 1958), will be reprinted by Hard Case Crime later this year under his own name, a mere 50 years later.

" Farris eventually became the author of the “Harrison High” books, which sold in the millions, and he became an even bigger seller once he started writing horror fiction that was invariably tinged with the supernatural. Books like The Fury (1976) and All Heads Turn When the Hunt Goes (1977) are as close to classics in the field as you’re going to get, and yet … even though Farris has averaged close to a book a year since those two books, unlike Stephen King, Dean R. Koontz and mystery-wise, Ed McBain, who came along about the same time he did, it is as if no one’s ever heard of him. Nobody knows his name."

If you were a reader in the early 1960s it was impossible not to know the name of John Farris. Harrison High, the novel Lewis refers to, was popular for two reasons. First because it was a fine true novel about high school life. The aspects that were judged scandalous by some critics were in fact the truest parts of the book.

What set it apart from all the other high school novels was that it was very much like the literary novels of the time, especially those of the unjustly forgotten Calder Willingham. Harrison High remains rich in dealing with its era (the late 1950s), its people (generally middle-class whites) and its social problems (back alley abortions were still common). But with all that it's the characters I've kept with me. And having gone back to the novel several times over the years I'm aware of how carefully and honestly Farris drew them.

The second reason for the book's popularity was that it was written by an ambitious young man who wasn't long out of high school himself. The Dell paperback edtion (much like Peyton Place just before it) seemed to be everywhere. Farris' photo on the back cover depicted a thoughtful man who might have played football at one time or another.

John Farris went on to write many more novels, a number of them true and lasting masterpieces. But for people my age that thick Dell paperback version of Harrison High was an especially important novel.
POSTED BY ED GORMAN AT 1:59 PM

I love both those books. I used to give copies of Sharp Practice to people just to get them to read it. I've read Harrison High more than once and might read it again. It takes me back to the '50s like nothing else.