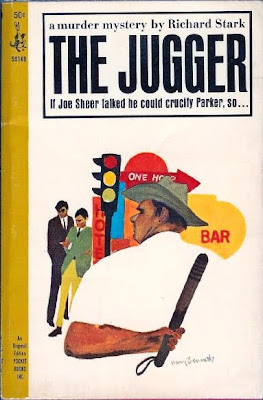 I found this quote on The Violent World of Parker website, a goodie. More" Westlake has more than once cited The Jugger as a failure, and although I’ve never seen it straight from the horse’s mouth, I’ve heard he considers it the worst book he’s ever written. Well, Mr. Westlake, if this is the worst you can do after cranking out more books than I can count, I am in great envy of your abilities.

So The Jugger ain't perfect and ain't gonna win none of them NYC awards but I don't care. I just enjoyed this particular take on Parker's world. I read it in two dazzled sittings.
Posted by Ed Gorman at 10:53 AM

Will use this on Friday.