reprinted from the  fantastic (in every sense) website Black Gate
black gate.com 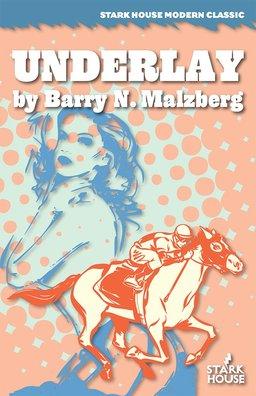 Back in March I read The End of Summer: Science Fiction of the 1950s, edited by Barry N. Malzberg and Bill Pronzini, and it reminded me what an astute observer of the field Barry Malzberg is. I mean, sure, most of us observe the genre. Malzberg has studied it, with a passion and understanding that only a handful will ever approach.
He’s also a very prolific writer, and his non-fiction books The Engines of the Night and Breakfast in the Ruins: Science Fiction in the Last Millennium were both nominated for the Hugo Award. Sadly, much of his best work is currently out of print, so I was delighted to see his short comic masterpiece Underlay brought back in print by Stark House Press this month.

Harry the Flat is dead and buried in the backstretch of Aqueduct Raceway. This is causing the Mob no end of trouble on the betting side, so Harry’s oldest and dearest friend — now carrying on with Harry’s widow, Gertrude nee Hawkins, in Harry’s absence, and in debt to the Mob $1,500 — is persuaded to dig him up after the eighth race. Tony Winner, low level mob boss, is very specific on this point, and to that end has had a time bomb surgically implanted in our hero’s thigh to impress upon him the urgency of this matter.
So on this fateful day, off he goes to the Aqueduct in Queens, New York, with a cello case stuffed with a pick and a shovel, prepared to dig up the dubious remains of Harry the Flat so the Mob’s control of horserace betting is no longer compromised. His mind is filled with thoughts of Harry, of Gertrude, of his ex-wife, and all the schemes and plans and bets that led to this moment. It will be a long day for our hero. He has a lot to learn about horse racing.

POSTED BY ED GORMAN AT 10:41 AM NO COMMENTS: LINKS TO THIS POST

I haven't read much of Barry Malzberg's work; a few short stories and the first title in his men's adventure series THE LONE WOLF, which I enjoyed.