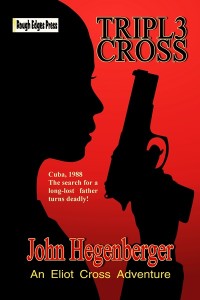 It's  1988, and small-town P.I. Eliot Cross is searching for his long-lost father. Then, a CIA informant says that Dad has been in deep cover for over twenty years. Now, the informant's been murdered and Eliot is on the run.

Scrambling to clear his name, Eliot journeys from Washington D.C. to Havana, Cuba, struggling against deadly drug-runners, syndicate hit-men and his own violent nature. But the worst is yet to come, as Eliot discovers his father is at the center of an international conspiracy, a nuclear threat and a double cross...or is that a triple cross?

Veteran author John Hegenberger spins a yarn that is both an exciting thriller and a compelling piece of "noirstalgia", expertly recreating a sense of late-Eighties paranoia and double-dealing and painting a vivid picture of Washington and Cuba during that era, as well as saving a shocking twist for the very end. TRIPL3 CROSS is pure reading entertainment.