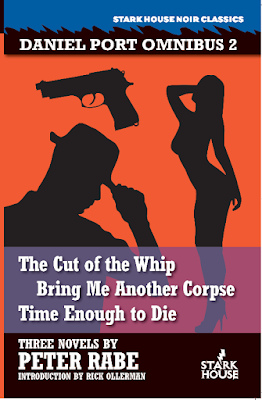 The End of Daniel Port
by Rick Ollerman

Peter Rabe ended his six-book saga of Daniel Port with 1959’s Time Enough to Die, a novel that both Rabe himself and Donald Westlake liked. From Westlake: “The plot is tricky without being artificial, and for once Rabe has surrounded Port with strong and interesting characters. Time Enough to Die is the last of the Port novels and the first of Rabe’s final cluster of five excellent books.”
...The series thus far could be summed up like this: the first book is excellent, one of Rabe’s best, and it gives us a Daniel Port that is a very special and talented man who outwits the entire mob.
The second book is interesting, as Port tries to help an old friend, and counts on his reputation as being a major factor in his ability to do so. He finds out how limiting and ineffective that can actually be.
In the third, what is interesting is that once again Port is forced to help an old acquaintance. Again, the fact that a third-rate crook can strongarm Dan Port is almost incredible to him, and it’s his own ego that compromises his abilities.
The fourth book shows what Port is like without that ego, without the self-confidence or exaggerated sense of his own abilities needed to get him through his situation. Sure, they kick in at the end, but he’s certainly far less exceptional than he ever thought he was before.
The fifth book continues Port’s loss of influence over the events of his own life. He agrees to a job, and never really gets a handle on it. Again, he gets it in the end, but the superman Dan Port of book one certainly seems like a changed man.
Finally, the sixth book, Time Enough to Die (1959 ), seems to take Daniel Port and get him as far away from the old life as possible. It’s almost as though, if he can’t be Dan Port anymore–if other people won’t let him be Dan Port anymore–he’ll just fly further afield.
The book is a fitting farewell to Danny Port. After having cooperated with the government in Bring Me Another Corpse, Port felt he had been pulled back into the world of organized crime that he’d tried so hard to leave behind. Again. It disgusted him, and the last book opens with Port in the very remote Mexican village of Guanadera. He thinks he’s there to sunbathe and make love to the beautiful Maria, but once again, despite how far he’s gone to get away once and for all and for good, he gets pulled back in….

[from the Introduction to]--