BEHIND THE BATES MOTEL: Robert Bloch 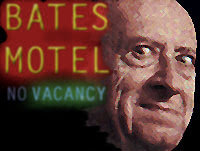 Ed here: I've been reading a collection of Robert Bloch's stories this week and remembered a fine piece about Bloch written by the always entertaining and insightful Paula Guran.

BEHIND THE BATES MOTEL: Robert Bloch

With the current centennial of Alfred Hitchcock's birth being noted with various events and symposia, I can't help but observe that PSYCHO -- the most notorious and perhaps best known of all of Hitchcock's films -- was adapted from a novel of the same name by Robert Bloch. As Douglas E. Winter put it in his 1985 FACES OF FEAR, "Two masters of horror have been immortalized by the motion picture PSYCHO...One, of course, is its director, Alfred Hitchcock; the other is the man who wrote the novel on which it is based. And no one ever said it better than Hitchcock himself: 'PSYCHO all came from Robert Bloch's book.'"

Before his death in 1994 at age 77, Bloch often joked that his obituary would begin with PSYCHO, a novel that was just a tiny part of his flood of work. Of course, he was right. And, although Mr. Bloch might disagree, perhaps that's the way it should be. PSYCHO, both the film and the book, had a resounding effect on both literary and cinematic horror. Quoting Winter again, "From the Depression heyday of WEIRD TALES and the evocative Universal film adaptations of FRANKENSTEIN and DRACULA, the tale of terror had suffered until the mid-1950s, as if the real horrors of World War Two had snuffed out the human need for fictional confrontation with death. Not until the Eisenhower era did the monsters reemerge in force: first in the innocuous science-fictional context of the "big bug" films, then in the exuberant American International youth films like I WAS A TEENAGE WEREWOLF (1957), and finally in the serious context of films and books like PSYCHO."

PSYCHO, however, was not Bloch's first or last exploration of psychopathology or the only way in which he influenced modern horror fiction.