CHARLES BECKMAN, HONKY-TONK GIRL, AND I by Gary Lovisi 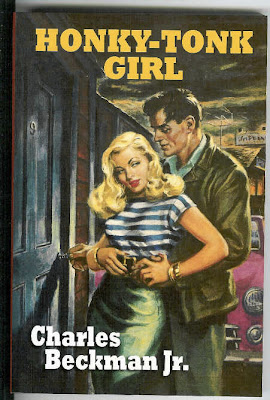 CHARLES BECKMAN, HONKY-TONK GIRL, AND I
by Gary Lovisi

One of the great things about publishing Paperback Parade, my magazine about collectable paperbacks and paperback publishing is all the wonderful articles and interviews it contains with so many artists and authors. My writers and I do a lot of research to find vintage era artists and authors, but sometimes they find me. Like when I received an email from Patti Boeckman, the wife of legendry pulp writer and jazz musician Charles Boeckman, Jr., who wrote under the name Charles Beckman, Jr.

When Patti asked me in her email if I knew who her husband was, I just blushed with joy and told her -- do I! Of course I recognized his name! In fact, I had many of his stories and books in my collection. From then on I had many back and forth emails with Charles, now 92. I eventually interveiwed him for Paperback Parade #77 and we became fast friends. He's a fine geltleman, a master jazz muscian for over 6 decades and a vintage era pulpster who has been writing for over half a century. The issue also featured rare excerpts from letters to him from his pulp editors of the 1940s, all about him and his work that open a fascinating window into the pulp writing business of that era. Charles wrote westerns for the 1940s pulps, crime stories for the 1950s digest mags and one early novel from 1953, Honky-Tonk Girl, which I feel is a minor hard crime and noir masterpiece, a classic crime novel.

Honky-Tonk Girl tells the tough story of Jazz musician Johnny Nickles and the members of his band adrift in a crooked town where every hand is played against him and his band. Beckman gives us great characters all awash in his authentic jazz background -- he is after all a longtime jazzman and knows all the riffs -- then he mixes in murder, mystery, and not one, but 3 femme fatales! It's a furiously churning noir soup. A very cool and fun novel to read. After I read it I immediately knew this was a book that was ripe for reprinting and deserved a new edition so it could be enjoyed by today's noir and crime fan audience.

Now, through the graces of Robert Reginald at Borgo Press / Wildside Books, $18.00 www.wildsidebooks.com) Honky-Tonk Girl has been reprinted in a new and attractive trade paperback. This is the first and only edition in over 60 years! This new Borgo Press edition features my introduction and the classic bad-gal sexy cover art from the original rare Falcon Books digest paperback edition. That original digest is rare today and sells for a hundred bucks or more, but this new Borgo edition really hits the mark and brings back to life a very underrated crime noir novel at a very affordable price.

Anyone interested in Honky-Tonk Girl can order a copy through Wildside Press. If you are interested in vintage and collectable paperbacks, I know you will get a kick out of my magazine Paperback Parade; a 4-issue subscription is just $35 in the US. You can find out more at my website www.gryphonbooks.com.

This is a really good read for me, Must admit that you are one of the best bloggers I ever saw.Thanks for posting this informative article.

Thanks for alerting me to this one, Ed. I ordered it today.

Charles Beckman's work and life were the subject of a fine article by Mike Baird in theCorpus Christi Caller-Times newspaper of Jan. 2, 2012 and on their website at http://www.caller.com which shows 11 photos, one in which Charles is holding up the new Borgo edition of his novel Honky Tonk Girl.