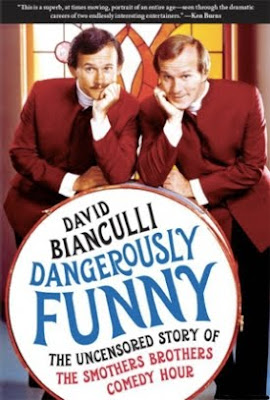 
By Kimberly Potts
Oscar winner George Clooney -- a current awards season favorite with "The Descendants" -- has added another project to his packed upcoming movie slate: Clooney and Smokehouse Pictures partner Grant Heslov will produce a movie about the Smothers Brothers and their groundbreaking TV series.

Clooney and Heslov are teaming with Sony to turn David Bianculli's 2009 book "Dangerously Funny: The Uncensored Story of 'The Smothers Brothers Comedy Hour'" into a film.

Bianculli confirmed the project on his site, TV Worth Watching. He called Clooney his dream choice for the movie adaptation of his book about the Smothers and their 1967-69 variety hour series.

Read more: Clooney Tells Berlusconi Over Sex Trial: Do I Know You?

"The Smothers Brothers Comedy Hour" -- which counted Steve Martin and Rob Reiner among its writers -- drew the ire of CBS censors by including social commentary about the Vietnam War and politicians. It was cancelled by the network in 1969.

"First, I'm thrilled on behalf of Tom and Dick, whose story deserves to be told and retold, and whose efforts to inject topicality into scripted TV comedy in the 1960s led very directly to the sort of thing Jon Stewart, Stephen Colbert and Bill Maher are doing today," Bianculli wrote.

"But I'm also thrilled because, when the book was still in galleys and I was asked by the film-division agent at my literacy agency to name my dream filmmaker for a Smothers Brothers movie, I said two words. One was George. The other was Clooney."

Read more: Hugh Jackman Shows Conan How to Be Like George Clooney (Video)

Brian Hecker and Craig Sherman will write the screenplay for the Smothers movie. They are also co-writing "Atari," a biopic about Atari founder Nolan Bushnell.
Posted by Ed Gorman at 12:51 PM

The story of this movie is really great and it is too funny movie. In this movie all characters played fantastic role. I like this movie to much.

Oh, joy! I hope it's a decent homage, and not like the Three Stooges movie currently soiling the screens.