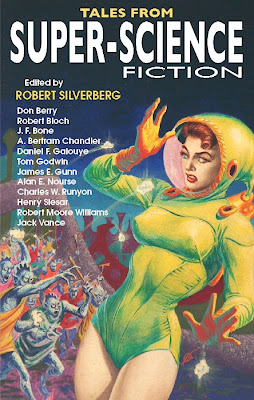 Ed here: For people like Bill Crider and me the announcement that follows is like the pearly gates opening up. There was no other sf mag like Super-Science Fiction. Scoffers might say that no other sf mag WANTED to be like Super-Science but if you were the right pimply age no other mag provided the same thrills. The copy below tells you all about it. Once again the great Haffner Press comes through.

Description
Robert Silverberg has assembled a collection of 14 stories from Super-Science Fiction. S-SF was launched during the sf boom of the mid-1950s. Paying a princely rate of 2 cents a word the magazine attracted fiction by Isaac Asimov, Robert Bloch, Harlan Ellison. James Gunn, Jack Vance, and Donald Westlake, and featured cover art by Frank Kelly Freas and Ed Emshwiller. Running for 18 bi-monthly issues (Dec ‘55 to Oct ‘59), the magazine eventually devolved into a publication capitalizing on the then-current craze of “monster” stories.

Editor Silverberg traces the genesis of Super-Science Fiction from it’s beginnings as an outlet for numerous colonization/expedition stories to its conclusion with such stories as “Creatures of the Green Slime,” “Beasts of Nightmare Horror” and “Vampires from Outer Space.” It’s fun, it’s cheesy, and we’re really looking forward to it!


Table of Contents
Introduction by Robert Silverberg
"Catch 'Em All Alive" by Robert Silverberg
"Who Am I?" by Henry Slesar
"Every Day is Christmas" by James E. Gunn
"I'll Take Over" by A.Bertram Chandler
"Song of the Axe" by Don Berry
"Broomstick Ride" by Robert Bloch
"Worlds of Origin" by Jack Vance
"The Tool of Creation" by J.F. Bone
"I Want to Go Home" by Robert Moore Williams
"Hostile Life-Form" by Daniel L. Galouye
"The Gift of Numbers" by Alan E. Nourse
"First Man in a Satellite" by Charles W. Runyon
"A Place Beyond the Stars" by Tom Godwin
"The Loathsome Beasts" by Dan Malcolm (aka Silverberg)
Posted by Ed Gorman at 12:51 PM

Yes, this is great news!

You know that gorgeous chick on the cover, i want to bugger her.

So do i my old mate, that bird is incredible.

Who the hell is "jervaise brooke hamster"? I've seen his name all over various comments pages of Blogger sites. Really wish this wanker would STFU. Or, at least, get a girlfriend . . .