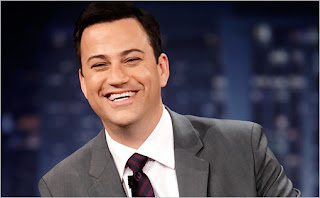 Jimmy Kimmel takes on Jay & Dave
by Ken Levine
Ed here: In case you don't know the name Ken Levine here's a quick sketch. His blog is is unequaled in giving civilians like me a look at how show business works.Nam

Best of luck to Jimmy Kimmel who tonight begins his show at 11:35 on ABC. Personally, I’ve always liked Kimmel’s show and found his relaxed style refreshing. To be honest, in the late night wars, the best hosts were on at 12:30. Kimmel, Jimmy Fallon (whose show has more actual entertainment value than any talk show on television), and Craig Ferguson (who’s extremely talented but a little too impressed with himself for my taste).

Kimmel becomes the second member of the “new guard” to try to crack through the established prime time late night scene. Conan was first and fizzled rather loudly. But I think Kimmel is more accessible than O'Brien. Conan’s tongue is permanently imbedded in his cheek and although I think he’s funny, he comes off more as a spoof of a talk show host rather than an actual talk show host. The audience seems to prefer a real person in that role. Conan is now on TBS where he has kind of disappeared. When was the last time you saw Conan that wasn’t a promo on the baseball playoffs? Team Coco fans may outraged by me for saying that, but the truth is his show has underperformed in the ratings.  Doing better than George Lopez is not exactly an achievement.

Still, the impulse to give him THE TONIGHT SHOW was a good one. Younger viewers don’t relate to Jay or Dave. And I don’t think any talk show host is being slighted when a network gives him twenty years on the air for an outrageous salary. Johnny Carson, still the Mozart of talk show hosts, knew when to bow out gracefully. Dave and (especially) Jay will go out kicking and screaming. But make no mistake. They will go out.

for the rest go here: http://kenlevine.blogspot.com/2013/01/jimmy-kimmel-takes-on-jay-dave.html
Posted by Ed Gorman at 6:30 PM