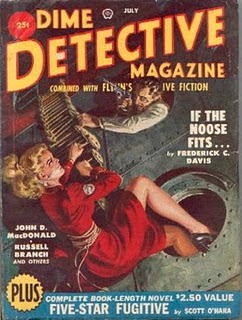 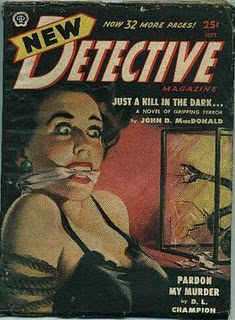 Years ago, as a fledgling enthusiast of pulp and paperback fiction, I was a big fan of the legendary JDMBibliophile ‘zine. I was especially fond of the “Early JDM” column, in which Francis M. Nevins Jr. profiled MacDonald’s pulp stories from Black Mask, Dime Detective, and other such wonderful treasuries of hardboiled fiction.

Several of those stories, with JDM’s blessings, were eventually collected by Martin H. Greenberg, Nevins, Walter Shine, and Jean Shine in the two “Good Old Stuff” volumes of the 1980s. But many others remain unreprinted. This is unfortunate, because nuggets of tough-guy gold repose in those now-crumbling pulpwood pages. As cases in point, I would refer you to two novelettes from Dime Detective that show MacDonald at his youthful peak as a riveting storyteller.

I wrote about those stories in the Spring 1992 issue of The JDM Review, and what follows is an updated recap of the article. I figure that most of you are unfamiliar with the 1992 article. Twenty years later, with pulp making a resurgence of sorts with e-books and POD houses, it may be a good time for a reminder as to how energetic MacDonald’s magazine work was.

When Tige runs afoul of a crooked gambling ring, local gangsters try to kill him. Failing that, they frame him for the murder of a former player. With a pert young woman on his side, Gaynor clears his name and brings the bad guys to lead-laced justice. (Man, pulp lingo is contagious.)

From the first page, in which Tige is shot and pushed out of a speeding car on a lonely country road, “Call Your Murder Signals!” is textbook-perfect pulp. JDM keeps the plot moving at high velocity, while throwing in the occasional twist of phrase that presages his mature Gold Medal style:

The blurb on the magazine’s contents page is pure pulp platinum: “Snap into kill formation, boys, and -- CALL YOUR MURDER SIGNALS! When the trigger toughs tried to bench him for keeps, All-American Gaynor decides he’d rather do-in than die.”

Another placid town seething with hidden corruption, Hunt City, is the setting for “Too Many Sinners” (Dime Detective, June 1949). Johnny Rogan, a “tall, hardy-looking young man with a firm jaw, friendly blue eyes, and a shock of yellow hair,” is a soft-hearted repo man. Assigned to repossess a car for a bank, he encounters a prostitution and extortion ring, a deceptively cherubic old man named Esperance whose enemies have a way of disappearing suddenly, and a lethal beauty named Carlotta.

As in “Call Your Murder Signals!”, JDM keeps the action rocketing along. There’s a masterful sequence in which Johnny, tied up in his car and doused with gasoline, struggles to free himself before a lighted cigarette burns down and ignites the petrol.

The blurb for this one is even better than the one for the 1948 novelette:

“A thrill-starved girl’s fury cremates -- TOO MANY SINNERS. She was just a brunette on a skip list -- steering Johnny to hell."

In between the beatings, shootings, and stabbings, the mundane details of Rogan’s repo job have an authentic ring. One suspects that JDM drew on his own brief career in repossessing cars and appliances while putting himself through college.

Incidentally, if you think “Call Your Murder Signals!” and “Too Many Sinners” push the limits of corn, consider that two other titles in the June 1949 issue were “A Sap Takes the Rap” and “Tin-Lizzy Houdini.” As noted in the “Good Old Stuff” collections, the titles of MacDonald’s pulp stories were often changed as they crossed the editor's desk. Whatever the title, they deserve better than the impermanence of brittling pulpwood pages.
Posted by Ed Gorman at 1:57 PM

I still have my copies of the JDM BIBLIOPHILE and I've read both stories in the issues of the pulps in my collection. JDM's pulp work has been largely ignored despite the two "Good Old Stuff" collections. JDM updated some of the stories which I think was a mistake. The original versions have a 1940's noirish quality that reads well.