Ed here: Classic Film and TV listed their most popular pieces of the year. Here's my favorite. 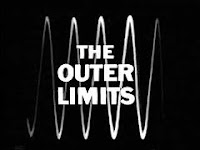 Leslie Stevens and Joseph Stefano (who wrote the screenplay for Psycho) were the creative talents behind the best sci fi anthology of the 1960s (maybe of all time). The concept was that each show would stay within the confines of the science fiction genre and feature a “bear”—Stefano’s nickname for a scary monster. The scripts weren't as consistently strong as The Twilight Zone and the show’s budget often worked against some of the high-end concepts. But when The Outer Limits was good, it was very good. Without further adieu, we list our picks for the five best episodes.

1. Demon with A Glass Hand - Trent (Robert Culp) is a man “born ten days ago” who has no previous memory and is being pursued throughout a huge deserted office building by alien beings that want to kill him. His actions are guided solely by his hand, which is made of glass with a tiny computer inside. The hand has two digits—the thumb and pinky—and talks to Trent. This fascinating episode penned by Harlan Ellison showcased The Outer Limits at its best: a brilliant concept, an offbeat setting, and a strong central performance.

for the rest go here:
http://www.classicfilmtvcafe.com/2012/08/the-five-best-outer-limits-episodes.html
Posted by Ed Gorman at 12:48 PM