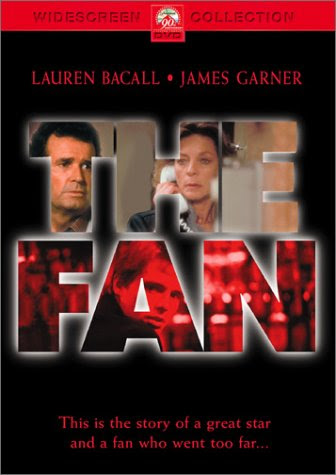 BY FRED BLOSSER
Producer Robert Stigwood ended the 1970s with three major musicals in a row, “Saturday Night Fever,” “Grease,” and “Sgt. Pepper’s Lonely Hearts Band,” and then stumbled in 1980 with “Moment by Moment,” a dumb romantic melodrama with Lily Tomlin and John Travolta. “The Fan” (1981) was expected to revive his winning streak, headlining Lauren Bacall and James Garner in a suspense thriller about a Broadway star (Bacall) stalked by the deranged title character, played in fine creepy fashion by newcomer Michael Biehn. But “The Fan” also did mediocre box office. Some observers believed the timing was bad. Three real-life tragedies involving stalkers were still uncomfortably fresh in peoples’ minds -- the murders of John Lennon and actress/centerfold Dorothy Stratten, and the attempted assassination of President Reagan. Other critics blamed the studio’s marketing of the production as a “Bacall and Garner movie.” The two stars drew an older fan base that perhaps expected a sedate show-biz suspense drama, and instead were surprised and turned off by scenes of slasher violence and homosexuality.
Despite co-billing with Bacall, Garner has hardly more than a walk-on role as Jake, the ex-husband of Bacall’s character, Sally Rice. He doesn’t even show up in the denouement when Sally has her big confrontation with knife-wielding Douglas Breen (Biehn) in an empty theater. Garner’s absence from this key scene must have confounded his followers. Surely Jake would pull a Jim Rockford and show up in the nick of time to rescue Sally.
Thirty-plus years on, viewers who come to “The Fan” by way of its new release as a Warner Archive Collection DVD may find it far more interesting than moviegoers in 1981 did. This was director Edward Bianchi’s first feature film (he’s since gone on to a prolific career directing TV dramas), and instead of investing the movie with his own style, he clearly borrows from Brian de Palma for the stalker scenes and from Bob Fosse for the backstage rehearsal scenes and Sally’s big number for opening night. It isn’t that Bianchi doesn’t borrow well, with the debt to de Palma underlined by the fact that the movie is scored by de Palma’s resident composer, Pino Donaggio. It’s that the jarring slasher scenes seem to belong to a different movie than the slinky, “All That Jazz”-flavored song-and-dance routines. Adding to the tutti-frutti mix, Bacall’s spotlight number, “Hearts, Not Diamonds,” sounds like a Saturday Night Live parody of a 1981-era Marvin Hamlisch/Tim Rice show tune. In fact, it actually is a Hamlisch/Rice composition.
Where the 1981 audience may have been disappointed by this scrambled omelet of over-the-top moments, it’s a lot more entertaining than the predictable, star-driven suspense movies that followed later in the ‘80s, such as “Still of the Night,” “Jagged Edge,” and “Suspect.” Younger viewers now may get a kick out of the movie’s vanished world of land-line rotary phones, typewriters, and people smoking in hospital waiting rooms. Pay attention and you’ll see Griffin Dunne, Dana Delaney, and Dwight Schultz in minor roles. A scene of Douglas cruising a gay bar, with unfortunate results for a young man he picks up, has chilling implications on a symbolic level that would not have been apparent to audiences when the movie opened in May 1981; the first reports of a real-life scourge stalking the gay community, AIDS, had not yet surfaced.
The Warner Archive Collection edition of “The Fan” is a manufactured-on-demand DVD. It has a scene-selection menu and English captions for the hearing-impaired, but no other extras. The image is a little soft, which may be unavoidable for older source material, and it’s only a drawback in the “Hearts, Not Diamonds” number where a crisper image would add to the fun.
CLICK HERE TO ORDER FROM WARNER ARCHIVE
Posted by Ed Gorman at 7:23 PM

Actually Sgt Pepper was a huge bomb both critically and financially.