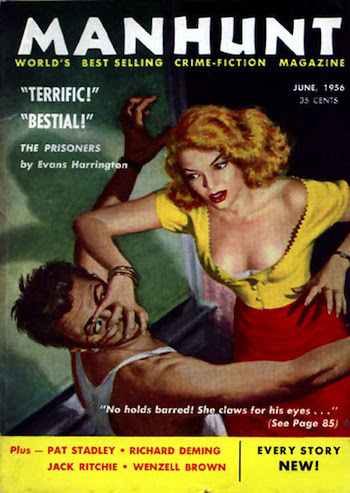 Block’s early fiction appeared in the 1956 February and June issues of Manhunt. Unknown to him, there was a Scott Meredith connection.

In the summer of 1956, after my first year at Antioch College, I went to work in the mail room at Pines Publications. One of Antioch’s chief attractions was its co-op job program, designed to furnish students with real-world experience in their careers of choice; I wanted to be a writer, so I picked a job at a publishing house.
Pines had a paperback line, Popular Library, and a whole string of magazines and comic books. The job experience was reasonably interesting, but the chance to live on my own in Greenwich Village trumped it. I shared an apartment at 54 Barrow Street with two other Antiochians, and I hung out a lot in Washington Square and the Macdougal Street coffeehouses, and one Sunday afternoon I stayed home and set up my typewriter in the kitchen and wrote a story about an amoral kid who lives by his wits, runs a mail-order scam, and like that. End of October I went back to college and took the story with me.
Earlier, I’d read The Jungle Kids, a paperback collection of some of Evan Hunter’s short stories, packaged to capitalize on the success of The Blackboard Jungle. One thing I’d noticed was that most of the stories had appeared in a magazine called Manhunt. I’d never seen a copy, but I got the address someplace, most likely Writer’s Market, and I mailed in the story I’d written on Barrow Street.
Now I’d submitted my work before, and indeed had a burgeoning collection of rejection slips taped to the wall of my dorm room. But what I got this time, along with my manuscript, was a note from one Francis X. Lewis, Manhunt’s editor, saying that the story just sort of trailed off, and needed some kind of a snapper ending. If I could come up with something suitable, I might have a sale.
Damn!
There was a magazine rack in the Yellow Springs drugstore, and, mirabile dictu, they carried Manhunt. I bought it and read all the stories in it, and I tacked on an O. Henry–type ending which saw the little bastard hoist on his own petard.
Off it went and back it came, with another note from Mr. Lewis, this one rather less heartening. The ending was too pat and predictable, but thanks for trying.