Invasion of The Body Snatchers Redux 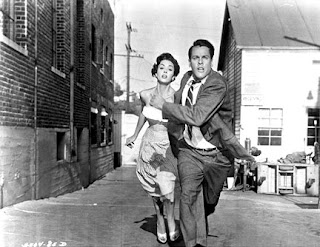 Fred Blosser pointed me to an interesting article in today's NY Times about the new Nicole Kidman film "Invasion"--the fourth version of Invasion of The Body Snatchers. Here's a section I found interesting:

"Siegel’s laconic style is well suited to conveying a multitude of meanings (as he would prove again in 1971’s “Dirty Harry”), but the open-endedness of “Invasion” was not a conscious goal so much as the result of a tangle of personalities behind the scenes. The film’s producer, Walter Wanger, made his name with issue-driven entertainments like the Spanish Civil War drama “Blockade” and Alfred Hitchcock’s espionage thriller “Foreign Correspondent.” Wanger first read Finney’s story when it was serialized in Collier’s magazine in 1954, and even before the novel was published the following year, he had hired Siegel and the screenwriter Daniel Mainwaring to adapt it.

"The book, notably more upbeat than the film, ends with the vanquishing of the aliens. The movie’s subversive elements can be traced mostly to Mainwaring, whose other screenplay credits include the classic noir “Out of the Past” (1947). A committed leftist who was briefly blacklisted, Mainwaring infused Finney’s scenario with an unsparing pessimism. The love interest (Dana Wynter) winds up a pod and, in the cut Siegel submitted to the studio, Allied Artists, the hero (Kevin McCarthy) is last seen charging out into freeway traffic, issuing a warning that no one heeds: “They’re here already! You’re next!”

"With a budget of less than $400,000, Siegel finished the film in 23 days, but the post-production dragged on for months when Allied Artists complained about the odd mix of humor and horror, and the bleakness of the conclusion. Trims were made, and in a compromise that further mixed the movie’s message, Siegel and Mainwaring, with a minimum of conviction, tacked on a happy ending.

"Mr. Kaufman’s “Invasion,” while fully a product of its time, carries out what Siegel was unable to do, adding hints of comedy even as it pushes its hero (Donald Sutherland) toward the grimmest of fates. Homage is duly paid to its predecessor with a couple of knowing cameos: Siegel is glimpsed as a cabdriver, and an aged Mr. McCarthy reappears, still wild-eyed and running, sounding the alarm like a Paul Revere who’s been at it for 20 years.

"Reissued on DVD last week in a two-disc edition, the ’78 “Invasion” also lends a uniquely creepy dimension to the fraught cold war practice of naming names. The drones, when they notice a human in their midst, alert the others by unleashing a sirenlike banshee wail. (The sound designer Ben Burtt used pig shrieks for the effect.)

Ed here:If you're interested in the subject of the first three movie versions, may I recommend The Invasion of The Body Snatchers Companion that I edited with Kevin McCarthy. Stepen King, Dean Koontz, Jon Breen, Tom Picirrilli, Fred Blosser and many other contribute articles about the various films plus there are extensive interviews with Kevin, Robert Solo (who produced two of the movies), Abel Ferrara and others. I prefer the Stark House edition. A much better looking book with more room for extended interviews. It's still available:

I was 11 when the second version came out and I thought I was too old for creepy nightmares but there I was waking up three nights in a row...

I never knew that Mainwaring wrote the script for the original. I read BUILD MY GALLOWS HIGH after I saw OUT OF THE PAST. Great movie and pretty good book. I have another of his books laying around somewhere on the shelf