New Books: Katja From The Punk Band by Simon Logan 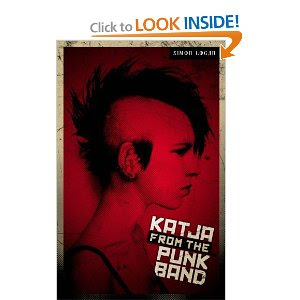 Katja From The Punk Band by Simon Logan

I love any form of art which is a puzzle.

“It doesn’t matter whether it’s Chino Moreno’s moody, vague lyrics, David Lynch’s disjointed and inverted narratives or the paintings of surrealists like Roland Penrose – if there’s a puzzle there then it draws me in.
After completing my first full length novel, Pretty Little Things To Fill Up the Void, and it turning out at 98K, I wanted to write something which more stripped down but I also wanted to challenge myself in terms of the narrative structure. Although not a huge fan of either Tarantino or Elmore Leonard, I’d both read Jackie Brown and seen the movie, and its structure of overlapping and sometimes colliding plotlines had stuck with me. It was a puzzle.

I therefore set out to write something which was leaner and meaner than PLTTFUTV and which adopted the interweaving plotlines structure. I started with the first scene - of the protagonist arriving at her work having just shot her boyfriend and stolen a chemical vial to be smuggled off of the island she is on and then hooking up with another character to help her escape –then basically just started spiralling everything out from there.

I tend to write out the entire plot to any of my novels, at least in sketch form, before I even think about beginning writing them and that certainly came in handy for Katja From The Punk Band. I came up with the separate plot threads then spent an afternoon cutting up pieces of paper with the various scenes which made up each thread and then arranging them and re-arranging them on the floor to see how they would best all fit together. Once that was done I filled in the gaps and cut out bits which weren’t going to work – and hey presto the book was born.

As well as the actual structure of the book I also wanted to adopt a more stripped-down approach to the actual writing itself, avoiding any unnecessary elaboration or descriptions and making sure it moved along at a fast pace throughout.
Since being published, Katja From The Punk Band has done really well for me, being selected as one of Spinetingler Magazine’s Top Ten Crime Books of 2010 as well as being nominated for their Best New Voice Award and coming in as joint winner of the Fireball Award for the Best Opening Line. Not only that but it got me an agent, the wonderful Allan Guthrie of Jenny Brown Literary Agency - so I certainly can’t complain.

So, with another two books in the bag in the meantime (Guerra, an industrial thriller about pirate broadcasters fighting a media war, and lovejunky, part dystopic crime thriller and part brooding noir romance) I figure Katja From The Punk Band 2 is a pretty good idea.