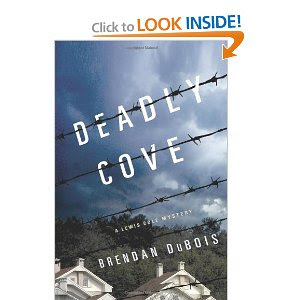 When I started writing my first novel, “Dead Sand” --- published by Otto Penzler Books --- George Bush was in the White House and we were engaged in combat in Iraq. Now, I’m happy to report that St. Martin’s Press has just released the seventh book in my Lewis Cole mystery series, “Deadly Cove."

Astute readers out there might do the math and say boy, that Brendan DuBois is one prolific son-of-a-gun, but readers who know my depraved sense of humor will do the history, and say, yeah, right, DuBois, nice way to make a joke.

The joke being, of course, that I wrote “Dead Sand” following Iraq’s invasion of Kuwait and the first Persian Gulf War, overseen by the first President George Bush. I believe Marx once said that history repeats itself first as a tragedy, and then a farce, but I’m glad he never said anything about mystery novels repeating themselves.

For that’s the obvious pitfalls for a recurring mystery series, is repeating the same old plots with the same old characters. It’s comforting to go back and walk and re-walk the same characters and situations, but I’d like to think that I avoided those tempting pitfalls in “Deadly Cove.”

First of all, while the cast of characters remains the same, there are important differences. The main character is Lewis Cole, a former Department of Defense research analyst, retired on disability, who has a cushy cover job as a columnist for “Shoreline” magazine and lives in an old house in Tyler Beach, N.H. His best friend is Diane Woods, a gay police detective with the Tyler Police Department, and he also has ties with Paula Quinn, a former lover who’s a newspaper reporter for the Tyler Chronicle. And rounding up the crew is Felix Tinios, a former mob enforcer from Boston’s North End, who has a new career as a security consultant.

Throughout all of my books, Lewis gets involved in things mysterious in and around the historic New Hampshire seacoast, calling on his friends to either help him out or provide back-up where needed. There have been killings, violence, historical discoveries and breathtaking escapes, touched with a funky sense of humor. It’s been a fun series to write, and from a fair number of readers, I’ve had an enthusiastic response to Lewis and his adventures.

But in plotting book seven, I made a conscious decision to mix things up. I started plotting and writing “Deadly Cove” at the start of our current economic downturn, thinking it might be a gamble to do so (what if there was a stunning turnaround), but based on where the economy is now, it was a cinch bet.

This downturn has impacted Lewis and his friends. Lewis’ job at his magazine is threatened, and he’s forced to do more with less. Paula Quinn is now an assistant editor, with the same pay and more responsibilities. Diane Woods has been promoted to detective sergeant, and with the advent of New Hampshire allowing gay marriage, wants to marry her long-time partner, who’s reluctant to make that big step. She’s also dependent on the overtime while working at the nuclear power protests. And even a tough guy like Felix Tinios, quick with his fists and with a gun, is struggling to find a full-paying gig.

In “Deadly Cove,” a number of anti-nuclear protesters have descended upon the Falconer nuclear power plant, to oppose a decision to build a second reactor at the plant site. This comes on the heels of another nuclear disaster in Russia, not unlike Chernobyl, which reenergizes the anti-nuclear movement. (Of course, having the Japanese nuclear disaster strike a few months before “Deadly Cove” was released was just plain creepy). One would think that the protesters would receive deep support from the locals, but that’s not the case.

Many of the locals resent having their lives upended by the thousands of protesters. And beyond that, hundreds of union workers --- seeing the possibility of long-term, good-paying jobs threatened by what they see as long-haired, leftist troublemakers --- also come upon the scene. There’s tension in the air during the demonstrations, and in a sudden burst of violence, a prominent anti-nuclear leader is assassinated in front of Lewis and scores of others.

As Lewis investigates the shooting and its aftermath, he comes under relationship pressure from his girlfriend, a political consultant for a prominent senator running for president, as well as his new boss at “Shoreline” magazine, who is determined to make Lewis’ working environment the proverbial living hell. The shooter, who wants to keep his or her work under wraps, also stalks him. As the novel progresses, the supporting characters play their usual role, but there’s an edge to what’s going on, as the characters react to outside forces and actions beyond their control.

And for a first in my Lewis Cole novels, I also end the novel on a cliffhanger, with a prominent character facing death. It’s an ending that has ensured a number of e-mails from my readers, demanding to know what’s going to happen next, which makes me quite happy. I feel “Deadly Cove” is my strongest series novel yet.

Looking back, I don’t think I made a conscious decision to write a novel that reflects so many of our current economic and political tensions, but I’m glad I did. It’s a stronger novel for it, and I hope it doesn’t disappoint any Marxists out there.