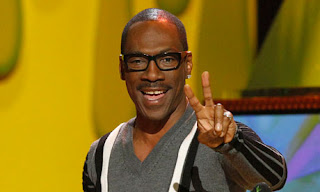 From The Guardian UK:

"Eddie is a comedic genius, one of the greatest and most influential live performers ever," said (Brett) Ratner, who recently directed Murphy in upcoming action comedy Tower Heist. "With his love of movies, history of crafting unforgettable characters and his iconic performances, especially on stage, I know he will bring excitement, spontaneity and tremendous heart to the show."

Ed here: I'm not sure why I'm paying any attention to this since I haven't been able to slog through more than forty-five minutes of an Academy Awards show in years.

The only Eddie Murphy film I've seen in a quarter century is "Bowfinger" that stupid-sweet movie he did with Steve Martin (and the lovely Heather Graham sleeping her way through LA). I was certainly a fan of his on the old Sat Night Live days. Man he was so original and funny. But his live concert put me off and not just for the much-criticised homophobia but also for the sheer self-infatuation and nastiness. Was this the real Eddie Murphy?

I once saw Brett Ratner interviewed and decided after only a few minutes that he embodied everything I hate about Hollywood. He's a piece of work--all ego, all mouth, all hack. The Academy had to dig real deep (nearly to China) to come up with him. He of course being a hack decided to promote his new (and as we know terrible) movie with Murphy by putting him center stage at the Awards,

I have a feeling I won't even make it forty-five minutes next Awards night. Unless Murphy is reborn into the comedian he was so long ago it's going to be a rough rough night.
Posted by Ed Gorman at 2:40 PM

BOWFINGER is not only the only one of Murphy's movies I like, it is also one of the few Steve Martin movies that really works. Truly a pleasant surprise.