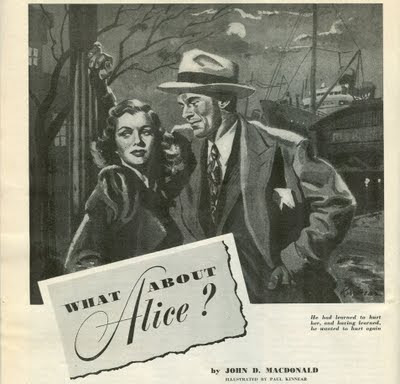 Ed here: Steve Scott's The Trap of Solid Gold website, dedicated to all things John D. MacDonald, is one of the most richly detailed sites dealing with the popular fiction of the forties, fifties, sixties and seventies. In learning about JDM we learn about not only his life but also the lives of pulp writers and editors of that era. For this post log on and scroll down.

The Sign was a national magazine that first began publication in 1921 and which published its final issue in 1982. Billing itself as the "National Catholic Magazine," it was produced in Union City, New Jersey by an order of priests and brothers known as The Passionist Fathers. Much like similar endeavors with a narrowly focused audience -- magazines like The American Legion Magazine and The Elks Magazine -- The Sign was modeled on the general circulation magazines of the day and featured everything from news articles; book, radio and movie reviews; sports articles; columns, and -- yes -- fiction. Before television took over our lives, nearly every magazine featured at least some fiction. And with articles bearing titles like "Why I Became a Catholic," "From Confucianism to Christ" and "The Evil That God Permits," The Sign would be the last place one would expect to find a short story by John D MacDonald. Yet in the early winter of 1947, in the magazine's December Christmas issue, MacDonald's "What About Alice?" appeared. It was the only time the author would grace the table of contents of this religious periodical, just as he would do with his one-time appearance in The American Legion Magazine.

Of course MacDonald was not a Catholic -- his heritage was as Waspy as a WASP's could be -- and his religious views could be charitably defined as agnostic. How one of his stories ended up in a magazine like The Sign is a tale probably lost to the ages, yet it is likely the result of his literary agent finding a paying market for a JDM story and not caring about who signed the check or what bank it was drawn on. As MacDonald once put it bluntly when recalling this period of his career, "What I was trying to do ... was earn a living at 1¢ and 2¢ a word.... If I did fifteen [stories] a week (not unusual) and sold two of them, after trying them all on every conceivable market, any small increment in skill or believability could make it possible to do ten a week and sell three."
Posted by Ed Gorman at 7:55 AM

It's the storyteller's task to tell stories, and surely JDM was doing just that. Is a storyteller not permitted to depict beliefs or ideals other than his own? I moved from liberal protestantism to agnosticism over my life, but recently I published a historical novel in which a Metis (French-Cree) girl receives a miraculous vision acts on it. I enjoyed writing it, and hope it was genuine and moving to those of that faith, and all readers.