Stephen Crane and Friend Horsing Around 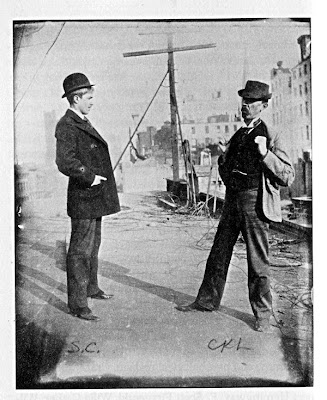 Steohen Crane and friend horsing around on NYC rooftop 1900.

Bill Peschel's blog is consistently one of the most intelligent and entertaining sites around. As a Crane fanatic, I wanted to share this from Peschel's blog.

There’s no other history about it; it’s just a neat picture. I used it to link to an essay I wrote a couple years ago: Stephen Crane: I Fought the Law and the Law Won, about the time he squared off against the NYPD to defend a prostitute who was being hassled by a street cop.

The cop later was executed at Sing Sing for murder — the first NYPD cop to hit the hot seat — and that incident showed up in “The Great Gatsby,” as the essay says.

I thought it was a cool of Crane to do that. It showed a sense of justice and courage, and it ended up costing him, because he had to leave New York City when he was humiliated at a trial when the police investigated his background and smeared his reputation.

for the rest go here: http://planetpeschel.com/wp/
Posted by Ed Gorman at 1:23 PM

Stephen Crane's definitely one of the greats - The Monster and The Blue Hotel are some of the greatest woirks of fiction ever written. Thanks for posting>>>>>>>>>>>>

Reminds me. I need to include Crane in my survey of early-early western writers.

I thought I'd seen all the photos of Crane, but that's a new one on me. It's certainly Crane okay and the other man, from the inscription, is his friend the painter CK Linson. Probably taken around 1893.