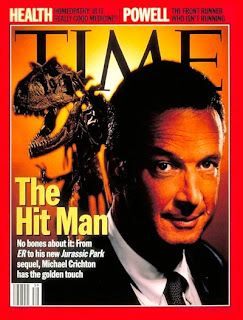 But for all his triumphs, I still like his early work better somehow. I enjoy Westworld more than Jurassic Park (I even prefer the somwhat messy Looker to some of the Big pictures) and his John Lange pulp stuff more than any of his later books (though The Great Train Robbery, Rising Sun and Sphere still work fine for me).

So I had a great time with the Hard Case Crime reissue of the John Lange novel Zero Cool.

This time out our hero is a radiologist named Peter Ross who, who visiting Spain, manages to pick up a lot of women and a trio of nasty and mysterious men who want him to perform an autopsy on a dead man who turns out to have been a gangster.

You have to admit. This is a pretty unique set-up for a crime novel. Ross and his elegant lady are dragged across Europe looking for an invaluable artifact. Lange was already a master of pacing. Ross is never quite sure what is going on as two different factions need his help to find an invaluable object.

Lange has more fun with this one than his other early books. The dialogue is breezier, the villains are a notch or two up the vermin scale and some elements of the unending race through various countries has the feel of Hitchcock directing Cary Grant.

This is one of those little gems of pure pulp pleasure, long on plot twists and derring do, and honed to lean perfection by a major storyteller.
Posted by Ed Gorman at 7:47 AM

That reminds me to resume my search for LOOKER on DVD. Thanks!

In India, Michael Crichton is popular for five books and, I dare say, no more — Jurassic Park, The Andromeda Strain, Congo, Disclosure, and The Lost World — probably because they were made into films. I, myself, have never read any of the John Lange novels. Something to look out for now.

I think I have all but two of the Lange titles. Those are a bit pricey on the used sites

Believe it or not, I had never made the Lange – Chrichton connection. A new hunt is on. Thanks Ed.

I thought A CASE OF NEED was one of his best books. But I also enjoyed the early "John Lange" work.

I acquired and read all of the Lange novels back in the early 90s, when they could still be bought for only about $10 each. My favorite was EASY GO, reissued as THE LAST TOMB. It's set in Egypt, and the story is about a group of tomb robbers who's plans go awry.

I will not anoint it is the best Lange novel, but just my personal preference with the history tie-in.

Another I thought enjoyable was one of his later John Lange novels, entitled THE VENOM BUSINESS, which, if memory serves, was about importing snakes from Mexico that was in reality only a front for smuggling.

It seems to me there was one that had a biker gang it it, that I enjoyed, but I cannot place which one it was.