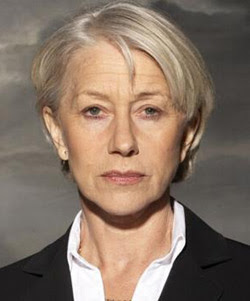 Ed here: I hate to say it because I'm a big Maria Bello fan but the new version of Prime Suspects looks to be judging by the trailers just one more hack cop show. Here from Criminal Element is Manda Collins discussing the original and the remake.

And there, in the middle of it all, was Helen Mirren’s Jane Tennison, pressing up against the glass ceiling one cigarette burn at a time.

Along with her team of crack detectives—many of whom were so not cool with being led and outranked by a woman—Jane didn’t always play by the rules. She had to remind her guys again and again to refer to her as “guv” instead of the loathed “ma’am.” She was at times crude, often insubordinate, and she had a bit of a drinking problem. And let’s not mention her affairs. So many affairs. But she got the job done. And she cared. (Which is why she drank.)

Over the seasons, Prime Suspect featured a veritable revolving door of classically trained British actors. Who can forget Ciaran Hinds, at his creepy best (or worst if you love him as Captain Wentworth in the 1995 version of Persuasion), as Edward Parker-Jones. Or Stephen Macintosh as The Street? Tom Wilkinson, Zoe Wanamaker, Colin Salmon, David Thewlis, Mark Strong…the list is endless. And always, always, Helen Mirren’s Tennison, at the heart of the drama.

Through the years, I’ve watched some of my favorite British shows get the Americanization treatment. Cracker, which was unrecognizable without Robby Coltrane. Coupling, which seemed crass and overproduced, and somehow mercenary, in its American iteration. And of course, The Office, which I cannot watch. Will this new version of one of my favorite mystery shows of all time work? I don’t know.

If I do end up watching, I’ll do so with an effort to completely divorce this new version from the classic one. It’s the only way those of us past a certain age can survive with our sensibilities (or our hearts) intact.

for all of it go here: http://www.criminalelement.com/blogs/2011/09/primally-bummed-about-prime-suspect 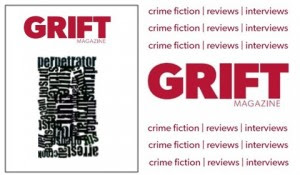 Grift will be published in print form three times yearly — February, June and October — and will feature a mix of short crime fiction, reviews, interviews and more.

In addition, griftmagazine.com will be home to more content that will include flash fiction, review, interviews and news from the world of crime fiction.
Posted by Ed Gorman at 8:04 PM

The US version of THE OFFICE is at times much worse than the UK, at times better...it's a different animal, in most ways. The US COUPLING was pretty dire, except for Lindsay Price...though COUPLING the original was basically FRIENDS done competently. I wouldn't be surprised if PRIME SUSPECT isn't great...but I will give anything Bello does a shot.

Thanks, Ed. That means a lot coming from you. I hope people come check out Grift.

Such a shame that Helen Mirren is British rubbish because she was an incredible little darlin` back in the late 1960`s, but now shes just a dirty old slag.